The last bits and pieces

So, now I have all the last bits and pieces I wanted to finish off my kit list. 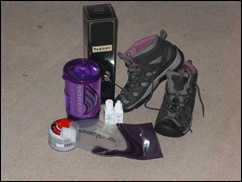 Some of it is rather pretty and strangely matching
I know a lot of people don’t bother with water treatment, but for my peace of mind, I have invested in a soft Platty bottle and some Aquamira drops, more lightweight and less bulky than the Travel Tap I had difficulty with in the Borders. I have my new, beautiful Jetboil Flash, which is less bulky, lighter and very pretty. The Tamdhu is my preferred dram, although I rarely get the chance to enjoy it as it’s a bit tricky to find, (I quite often ‘manage’ with Glenmorangie, Balvenie, Jura, The Macallan…) so I was touched when David found and bought this bottle especially for me, ahhh!
The boots? Ah, well, they were a bit accidental. I had ordered a sleeping bag from Webtogs, but when it arrived (and after a little discussion with a knowledgeable friend and the offer of borrowing a better bag) I decided to return it and instead, ordered these pretty Keen Shasta Mid-boots. They fill a small hole in my walking footwear collection, coming between my Brasher Hillmaster boots and my Merrell Siren shoes, which are wearing out. At 500g per shoe, they’re quite lightweight for me, and if I get used to them in time, they may make an appearance on the Challenge, even if only for the last few days if David brings them to Braemar for me. We’ll see.
There are a few pretty things there, I thought. Pretty and practical.
There has been a small amount of walking in the last few days, today I even ventured a little further out of town to walk around the Romach reservoir on my own. I felt quite uncomfortable at first, but the initial forestry is quite dense and claustrophobic. Once the trees spread out and the woodland takes a more natural feel, I felt  much more relaxed and quite enjoyed myself, especially my second breakfast/early lunch by the reservoir, sitting in the warm sunshine with fish jumping and a light breeze. It’s obviously a popular spot. 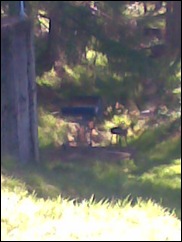 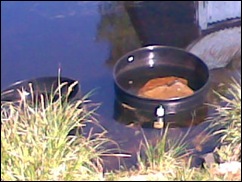 Plastic tubs submerged for a spot of beer chilling, me thinks. Spot the left over Stella…
(Rubbish photographs taken on my mobile phone as I managed to forget the camera. And the GPS. And the compass. Doh!)
Roughly 8.6 miles, 1073 ft of up at around 3 miles an hour. A little speedy, but that was to up my fitness levels as this was a relatively short and easy walk. Just short of 3 hours walking.
(Obviously, I'm not taking the whole bottle of Tamdhu, I have a lightweight hip flask from Bob and Rose to transport just enough across Scotland. Well, at least to Braemar, where David will bring the rest to top up the hipflask!)
Posted by Louise at 14:27

"rather pretty and strangely matching"

Not something I've considered much before. I must smarten (pretty) up.

Ah, but you can only see the 'pretty, matching' stuff there. My tent and rucksack are both seriously green, my duvet jacket is a different purple, my waterproof is bright blue, my Tilley is Hemp (so I can smoke it if required...) altogether, I'm going to clash with myself!

Looks pretty coordinated to me!

I have a pressing problem with shoes: My Terrocs have started to fall to pieces. So, I tried my old Salomon 4DGTX (or whatever they are called - I lose the will to live trying to remember names of flashy kit) and they felt massively clumpy! To think - only a year or so ago I was strolling around in Scarpa full grain leather boots...

So I need some new shoes and time is running out - I might buy some in London on the way up to the Challenge next Wednesday... Risky?

Ooo, Alan, tricky one! Judith bought some new footwear (Terrocs? Inov8s? All foreign to me...) on the way to the Borders the other weekend and seemed to wear them for the three days with no ill effects, but that's Judith, who knows what your feet might do? I'm sorely tempted to wear my new ones, but they've only been outside to the washing line and back, a total of 6', so I'll wait until I've taken them for a couple of 'proper' walks.