Yesterday was our monthly girly walk. We were due to meet in a car park in town then I was to drive to Babs’s house at Dunphail for her to lead the walk. Things started to unravel slightly on Friday night as first Rikky, then Angela and Jo all dropped out. A walk without our esteemed leader? I had been teetering myself as I'm still struggling  with the tonsillitis/sniffle that started back in January. I’m not ill, it’s just getting a bit annoying and perhaps a couple of days rest was the wise choice. However, my sense of loyalty had me feeling obliged to join the group, so I put my chauffeurs hat on and collected Sally from Pluscarden before meeting the remainder in town.

It was a beautiful day that saw us strolling out of Dunphail, north along the Dava Way to the Divie Viaduct. I know this stretch quite well, but usually head south, what a difference it makes walking in the other direction. We did the scramble going down, instead of up, then on towards Tomcork, where we had our first coffee break. 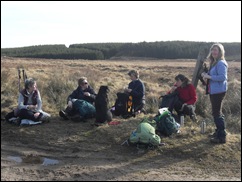 This was the first walk for a while that Babs and Honorary Girly Delilah had been able to join us and it was lovely to see them both again and catch up. In fact, Judith, Sally and I spent most of the day catching up, what with Judith’s Inadequate Bottom and my wheezy chest! 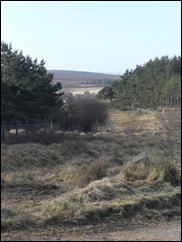 ( May have been looking south-westerly at this point, but I can’t remember) 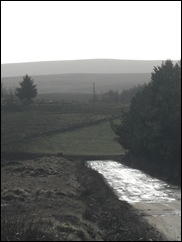 This is definitely the track towards Tomcork

We took a different  track today that took us from Little Corshellach up the hill through the forestry to a cross roads. Here we joined the track we’d taken last time, but neatly avoided the wet, boggy, fallen trees path that is a bit of a pain. On we went, out of the forestry, past Loch Dallas and Loch Noir and onto the shooting hut for lunch. 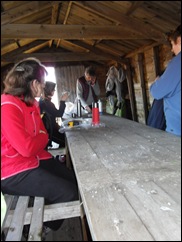 It may not be five star, but it’s shelter from the stiff breeze

Sally and I had been flagging before lunch, the result of an early breakfast and not snaffling a big enough snack, but we made up for it here and set off on the return leg with renewed vigour. As we reached Berryburn, we discovered that the path had been repaired since David and I were last here and scrambling was no longer required, but Judith’s inadequate bottom was becoming more of an issue by now. We paused to find a telephone signal and request Judith’s taxi to collect her from Tomcork, where we would rejoin our outward track to return to Dunphail. 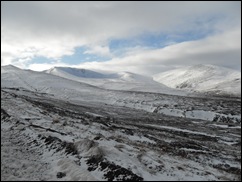 It was a lovely day for a hill walk 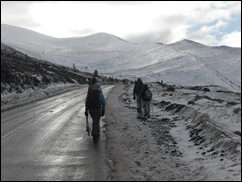 It felt like a long walk from the bottom car park 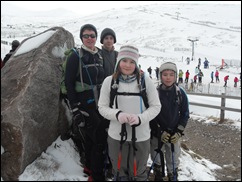 The motley crew, before we set off

Whoops. How did that happen?

I thought I’d got all the kit I required, having finally purchased waterproof matches, TH5 Tilley hat and a travel toothbrush (I really tried to convince myself I could live without that and just buy a gash toothbrush at each campsite, but I just couldn’t quite do it), so I decided yesterday was the day to order the final food supplies, my main meals from Fuizion and some Stoats porridge bars. Along with oat cakes, tinned fish (I’ll be prepared for odour free disposal…), squeezy cheese (has to be done), Ainsley Harriott’s cuppa soups, hot chocolate, horlicks, Glenmorangie (maybe Tamdhu…) and jelly babies, I should have enough to keep me going.
David then mentioned we need some reproofer, which found me on the web again today at one of my favourite sites, Webtogs. Whilst there, I happened across some Icebreaker items and one thing lead to another and on a different site, I found an Icebreaker top in my basket. A Dash Zip to be precise. In Salsa/Silver. Oh dear, that’s a shame.
It wasn’t my fault! (But I’m quite excited…)
Oh, there’s been a little walking, but not much. Louise and I took her little niece and the beagle for a short walk on Monday, a slightly different route, which was nice, but I don’t think we’ll be allowed to babysit that little niece again, having returned her with a minor laceration to the knee. Ahem.
Today I was supposed to walk to Roseisle and be collected by the Trusty Sidekick, but had an invitation to walk with a friend and two of her dogs at Culbin, so I opted to walk to her house first, around four miles, then walk the dogs for a further couple before she kindly gave me a lift home. Very pleasant.
Edited
Fuzion food ordered Tuesday, arrived Thursday. Excellent service! I haven't tried any yet, so this is a bit of a gamble, but all the reviews I've seen have been good, and I tend to think that after a hard day walking, I'll be hungry enough to eat a scabby donkey between two rusty bread vans, so I'm sure I'll be happy. We'll soon see!
Reproofer from Webtogs and porridge bars from Stoats arrived Friday, so equally good service. The Dash is despatched…
Posted by Louise at 18:09 No comments:

It’s been a turbulent fortnight.
First, David was promised a position that would keep us here for at least a couple of years, but it had to be proved that he was the only person suitable.
He was not deemed so.
Second, he then received notice of a position down south, near Basingstoke.
This was pants. It meant a return to shifts, regular trips abroad to unpleasant climes and few visits home, once every other month if lucky for the next three years. The travel connections meant nearly a twenty hour journey to get home which, with the return trip, would waste most of the weekend. Because of the point the children have reached in their education (we’re at the point of exams every year for the next eight years now!) it is not acceptable to move them into a different education system, so the children and I have to stay here, which goes against my promise to follow David to the ends of the earth. It would also make a mess of David’s plans for the future. For the past ten years he’s been studying (on and off) towards his degree with a view to becoming a teacher when he’s leaves his current employment. This would be impossible to continue and the sacrifice of family time and money wasted. It was also his negative preference (if there is such a thing) which was also unfair at this point, with less than four years to go.
I know this was the life chosen, but at this stage in his career it was an insult to 26 years of totally loyal commitment. I was distraught, angry, frustrated and disappointed (for David). For a couple of days there were sleepless nights and my daily quick walk was spoilt, I kept finding myself with tears streaming down my face, and usually my walks are my self medication. This was not a good place to be.
By the end of this week, things had changed, (although we are still waiting for the piece of paper…) and he is now going to a place near Wolverhampton. No shifts, time abroad possible, but less often, half the travel time with a train connection on his doorstep and plenty of time to study. This all makes a massive difference and I feel much more relaxed with the prospect.
We went for a walk yesterday, one that David had planned to practice my navigation skills. It turned out that because of the avalanche risk (!!!!!) the intended route was not so feasible, so there was a change of plan and we were to walk up towards Ben Macdui from the ski centre, but turn off towards Cairn Lochan then on to Cairn Gorm and back down via the Ptarmigan. Sadly, the lower car park was full and instead of waiting in a queue for a bus, we walked up to the ski centre. This added 1.35 miles and 411ft ascent and I think that’s why certain people with little legs (we had three of our little treasures with us) were beginning to struggle before we reached the path split. The walk leader (rather grumpily) made the call to turn about and we returned to the car. I suppose this counts as a failure and we were a little disappointed, but I did think someone was being a little over ambitious, considering it is the middle of winter and wading through snow at times was a little wearing.
5.2 miles
1.5 average mph (uphill)
1148ft ascent
A little less turbulence in the next few weeks would be appreciated.
Posted by Louise at 20:21 11 comments:

After lunch, I was preparing a hot cherry stone bag for myself to stay cosy (cherry stones instead of wheat) when I looked out of the kitchen window to see this little girl having her lunch break. 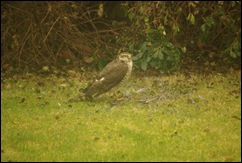 This female sparrow hawk was merrily ripping the feathers off her prey and I watched her for a while before I cuddled back up on my comfy chair with my cherry stone bag.

She made my day.