In alphabetical order (sorry). All weights in grams (unless otherwise stated) and approximate and items may be subject to change (if I change my mind. I’m allowed!)

And, my maths is notoriously dodgy…

The start of a new occasional series: Trigpointing

So today, we decided to go out for a little training (not least to avoid a little annual nonsense) before Laura returns to the continent for a short spell before the Challenge in May. We’d decided sometime ago that we should have a theme or purpose to our walks rather than just the tea and cake thing, so we thought that we could maybe start to visit trigs. Now, having had a look, it would appear that there are probably thousands across Moray and Aberdeenshire, so we might be a little choosy. Today we chose one that was easily accessible as we didn’t have quite all day.

We arranged to meet at the car park beside Castle Roy and I was a little early than expected, I still managed to arrive after Laura though, so I was true to form. After neatly abandoning my car, I quickly popped into the van for a natter before we set off. Unfortunately there were a few dark clouds around and there was a light sprinkling of rain which delayed the start of our walk for a little while, but as Laura hadn’t put the heating on in the van, we were soon starting to chill and the best option was to hop out, faff a while, then start to walk. As luck would have it, there is a portaloo in the church yard next to the castle, so we formed an orderly queue to powder our respective noses before setting off. 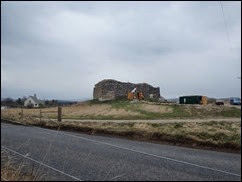 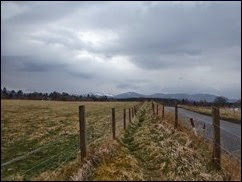 Meall a’ Bhuachaille and Craiggowrie Ridge

We set off across the road to walk the start of the Castle Roy Circular, but I had no intention of doing a waymarked walk. Behind the Abernethy Activity Centre, we stayed on the main path which tracks up and away around the hill, through rather nice woodland. It was very peaceful and pleasant walking. 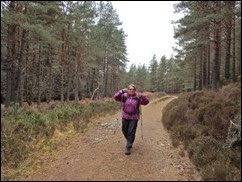 I have No Idea… 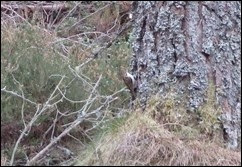 We ignored a few tracks going off left and right in order to pick up a vague track following a fire break. I wasn’t expecting a path as such, but there were obvious signs of a vehicle track, but it was quite deeply overgrown and it wasn’t long before it became impossible to pass with heather and juniper bushes forming an impenetrable barrier. 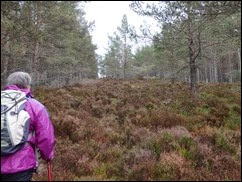 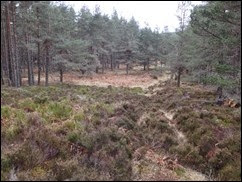 That had started so well

We veered slightly east off the track, but keeping it in view, to find an easier way. It was quite rough and tussocky, with the occasional fallen tree and hidden holes, but we were able to make reasonable progress. Using our GPS track, we knew that we were not far from our target, but the forestry had become quite dense by now and we were weaving through the trees and thick undergrowth to make headway.

Suddenly, the cry went up “I can see it!”

I forged ahead, a new lease of life pushing me uphill amongst the ever more dense trees. I lost sight of the “trig”, but kept going, until I suddenly realised it had been an optical illusion. Ho hum. At least we were closer now, so we continued bashing our way uphill.

Eventually, the ground began to level out and although the trees had finally begun to thin out, there were still the occasional clump over old trees and plenty of heather and gorse. Where was the darn trig!

GPS in hand, I knew I was within feet of the trig and suddenly, there it was! Hurrah!! The trig of Carn na Loinne. 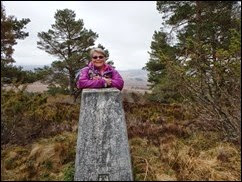 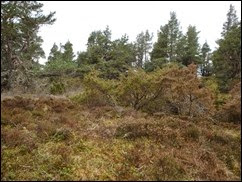 We celebrated, enjoyed broken views of the mountains around us, then decided to find a route down, but preferably not the route we’d clambered up. And there was a demand for a lunch spot.

So, we headed off, with occasional pauses, the odd peer at the GPSs and maybe the odd consultation of the map whilst still trying to keep an eye out for a suitable lunch stop (some people are quite choosy…). The route we chose appeared alarmingly easy in comparison to the route we’d come up. We’d decided to had down the west sign of our original track in an aiming off fashion in order to hit either our original track at the bottom or a track to the south of it. Quite soon we’d ducked down out of the keen breeze and suddenly spied a fallen tree that would give a handy, deer poo free perch. Phew, a lunch stop! The view was more not being able to see the wood for the trees, but it was nice enough and we were visited be a few dear little birds that hid their identity very well.

After lunch, we set off down hill on what now appeared to be another old vehicle track, but one I suspect was perhaps a pervious forestry work track, so not adopted as a regular route. 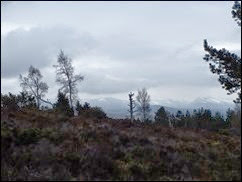 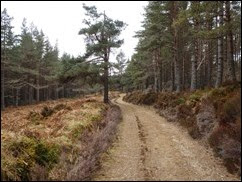 A nice a track to return on

However, it was not too rough or overgrown at all and in no time at all we found a real track at the bottom of it, just as we expected. Brilliant. Finally able to stride out properly we were soon on the track back to the cars and a quick trip to the coffee shop at Revack. 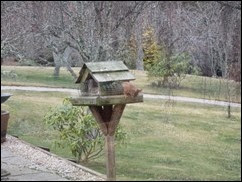 A visitor at the cafe