Well, I suppose it’s that time of year again when bloggers all over the world are writing reviews of the ups and downs of their blogging year. A few might be anyway. I thought I might do a little one too.

Last year started as a wholly miserable year, blighted by illness. It did, however, improve no end when David’s work was brought closer to home and I made a speedy and full recovery.

This year has proved to be a gentle and relaxed year in the main, with just a few moments of teeth gritting.

I have seen far more of my Bestest Walking Buddy and good friends, Laura, Mick and Gayle than usual which has been a treat, particularly as neither party appear to have blogged as much as usual and I’ve been left with few of their adventures to read about! We have enjoyed several walks together, joined on one or two by TTS, so I’ve been spoiled for walking company. 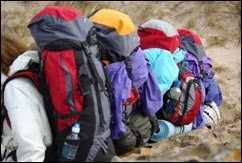 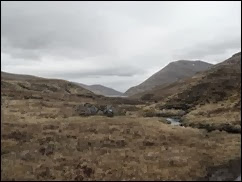 Alone, into the wild 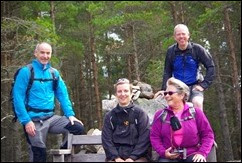 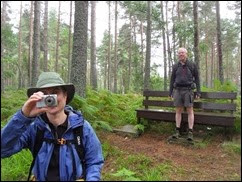 Speaking of walking, in May I set off on my third Great Outdoors Challenge, leaving Plockton and aiming for Lunan Bay. The start of this walk was just brilliant, especially day three, when I left Iron Lodge and set off in to the wilds on my own, really on my own, in to the middle of nowhere, with only my map and compass to keep me right. I loved it! I found my way in to Geann a’ Choilich with little difficulty and then made a confident decision to ford Abhainn a’ Choilich to meet the stalkers path that would take me to Bealach Coire Ghaidheil. It was a fairly bleak day, quite damp and grey, in fact dreich just about covers it, but I was thoroughly enjoying myself on my own, making me own decisions and taking my time. The views were constantly changing with the clouds and mist swirling around me, one minute revealing the mountains ahead of me, the next the glen below me. It was a truly wild experience and I was so exhilarated as I reached the bealach and started to pick my way carefully down to the path on the other side.

Shame that in the early hours of day five a suffered a totally unexpected asthma attack and had to withdraw. I was gutted. There was of course no questions of continuing alone and I know that but, still…I did get to meet up with Laura and accompanied her to the end of her Challenge, which was fun and a privilege.

Since then, things have been a little more family orientated, with exams, Duke of Edinburgh Award expeditions, Guides, weekend work, football, air pistol shooting, archery, competitions and our baby leaving, all growed up, to go to University in Aberdeen to study Psychology. It’s all go around here!

In November Laura and I got the fabulous news that we are Challenging together, as a team, in next year’s Great Outdoors Challenge. I can’t wait! Our route was quickly finalised and submitted and within a short time, given the green light. Then I was able to complete the next phase  of planning, booking accommodation. We have treated ourselves to the odd bed here and there. Team Ls Belles Tea Shop Tour of Scotland is (almost) ready to roll. A bit of food shopping, bus tickets and the odd miscellaneous item to purchase and we’re sorted.

Christmas has been a bit of a haze, it crept up on me whilst I wasn’t looking and was over in a flash. I was given two or three items perfect for Challenging, a purple watch, a Watertogo bottle and a rather lovely new camera, an Olympus Tough, which is proving to be quite a fun toy.

Playing with my new toy on Boxing Day at the beach

So, the New Year? Yep, that’s going to happen, and I anticipate it being another busy year, with more exams, the Challenge, more competitions and expeditions and maybe a completely new direction at the end of the year. Such fun! 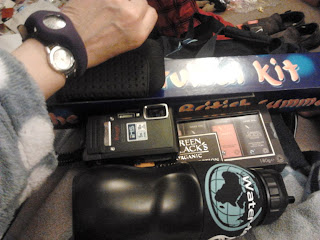 Well, there it is! Or was. Another busy Christmas almost done and dusted. Lots of lovely useful stuff and I can't wait to get on The Challenge and use some of it.
Merry Christmas one and all!
Posted by Louise at 19:59 4 comments:

When the Wind Blows

The original plan for today was to walk from where we finished yesterday along the path to Lossiemouth Woods, but as we knew the forecast for the end of the week is abysmal and we weren’t going to be able to do the best bit from Buckie to Cullen, we came up with Plan B, to meet at Cullen and do a car shuffle so that we could do the best bit.

Then, I saw the forecast for today and Plan C was hatched, where by I would check the forecast again this morning and text Laura if a change was necessary.

At 6.30am, TTS brought me my mobile so that I could check the forecast before I dragged myself out of bed. Sure enough, the winds were due to pick up during the day in readiness for tomorrow’s storms, and as I don’t do cliff edges well at the best of times, I sent a text to Laura proposing a complete change of plan, meeting at my house before doing a different walk, slightly in land. 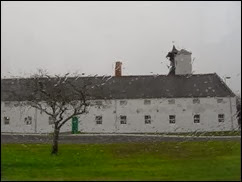 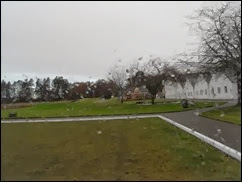 After a small amount of faffing on my part, we departed and I directed Laura to the Dallas Dhu Distillery, which was entertaining. After waiting for a shower to blow through, we abandoned the van and set off on a walk I did with Mick and Gayle on the Altyre Estate back in August. Except…

We set off out of the car park and I decided not to do the first bit of road walk but to launch straight onto the estate paths. As we rounded the corner by Estate Offices about half an hour later, we were confronted with an on-going shoot, which was a tad disconcerting, but they were moving away from us and I knew we were going to be walking on the other side of the estate, so we continued passed Blairs Home Farm and Altyre House. Last time I consulted the map more than I should have needed as I can be a little insecure when leading, but this time I made positive decisions and was therefore surprised when we happened across a ruin I’ve never seen before. So surprised, I didn’t photograph it. However, I could see my then goal (plans changed on the hoof) so easily located our unexpected position on the map and settled on our detour to meet my then preferred track. 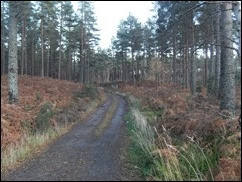 We left this nice surprise track behind

We continued and met the little road to Half Davoch where I expected to and a few hundred feet later took a little path I thought would have been useful. It probably would have been except for the un-crossable stream, so we returned to the road and changing our plans, again, continued to Clashdhu instead. We could have taken the track through the farm there, but decided to pick up the Dava Way, which we did. We never did take The High Path that I’d intended. 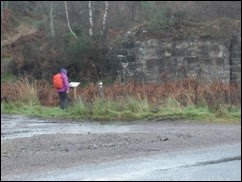 After displaying her ice-skating skills on the icy road, Laura closely examines the information board about the Clashdhu Crossing 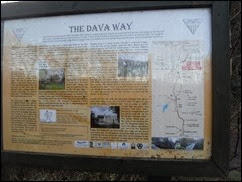 An information board about The Dava Way 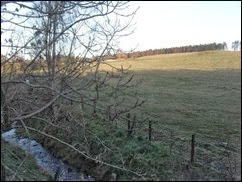 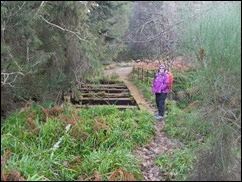 A close inspection of the Scurrypool Bridge 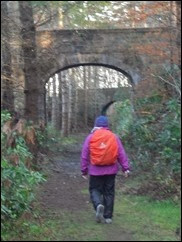 Laura, a couple of bridges away from Squirrel Bridge 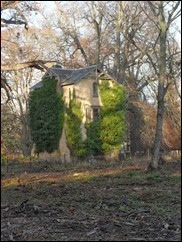 After inspecting a couple of information boards, we beetled along the Way through the estate. There’s quite a lot of railway stuff along the Way, bridges, fence posts and things, so quite interesting. We looked at (what remains) of the Scurrypool Bridge and continued on to Squirrel Bridge, where the Way leaves the now sodden rail bed and continues alongside it. Here however, we left the Way and made our way on estate tracks passing livestock, the folly, the overgrown curling pool (which is being cleared) through the farm yard, passed the ruined church, the currently vacant osprey nest and the cross slab, Ogham, to return to the van and eat sandwiches.

It was another brief and speedy walk, but a nice change of scenery. It was a lovely morning, as it turned out, but cold and I think we would have felt the breeze and the cold more keenly on the cliff edge. Certainly, it is currently horrid out there.

Laura had a plan. She told me about her plan and invited me to join her.

This morning, I was hoping there was a Plan B, as the rain hammered down from slate grey skies and the wind blew.

But no, there was no Plan B, so we did a bit of a shuffle with the cars to leave one at the end and one at the beginning and set off east into the wet, wet rain.

It wasn’t necessarily heavy rain, but it was persistently wet, all day.

The Moray Coast Trail officially runs between Forres and Cullen, following some stunning coastline. Having a little local knowledge, I suggested we started from Findhorn, to avoid either a dull plod along the cycle path or dicing with death along the back road. 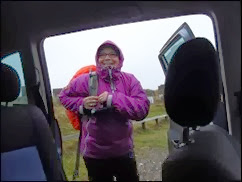 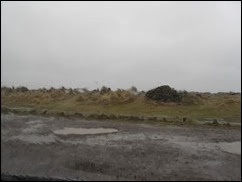 We set off a little later than intended after my hair appointment and the shuffling, through the dunes behind the Findhorn Foundation, passed the four turbines and the back of the former air base at Kinloss and into Roseisle Forest. It rained and blew and we chatted and beetled along at a rare pace. We soon found ourselves at the hide before the car park which seemed a jolly suitable stop for lunch, sheltered and less breezy. It turned out to be carpeted and to have plenty of information posters and as we sat steaming gently we successfully steamed up the windows so we couldn’t identify the birds that were visiting the feeding station directly outside the window. 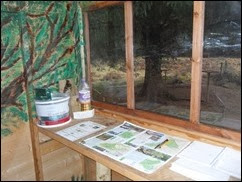 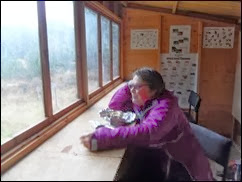 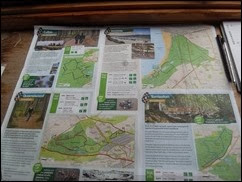 It turns out that for the first time in a long time, the toilets at Roseisle are shut, so we carried on beetling towards Burghead at a remarkable speed through the trees. Burghead came and followed a direct route to the maltings (more local knowledge) and down the side to pick the Moray Coast Trail back up and continue beetling in a speedy fashion towards Hopeman. Sadly, it wasn’t the sort of day for a coffee or tea stop en route, so we just kept beetling along.

In no time at all, we found ourselves at Hopeman Harbour and back at the van, bundling ourselves inside out of the wet, wet rain. Then, we needed a cup of coffee, so we headed back to Findhorn where the other car was. We did a turn round the village, just in case the Findhorn Bakehouse was open and were delighted to find that it was. We popped inside and found a lovely table for two next to a cosy radiator, ordered our coffees and resisted cake. 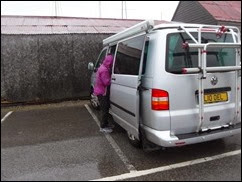 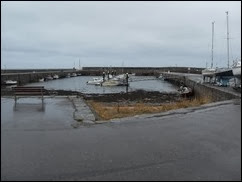 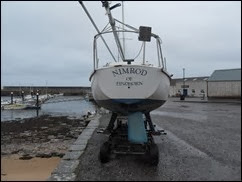 A lovely day out, if a little damp around the edges. There may have been some whinging, but just a little.

Due to the weather forecast, we may not walk this route in order…