Well, we've been home since Saturday lunch and the first thing I did Sunday morning was catch up on a few blogs. This left me thinking our few walks somewhat paled into insignificance as some people have been up to some terrific things! However, considering our handicaps, (four children between ages 8 and 13 years and my mother, whom I'd better not age!) we did okay.

Our first mini-adventure was a 4 mile walk we know at Flowerdale Falls. A lovely little walk with a tiny bit of a climb up to waterfalls and a view over Gairloch out to the isles. It was here three years ago we saw our first golden eagle. Half an hour into the walk, David said,
"Wouldn't it be good if we saw a golden eagle now."
And there it was! Wasn't quick enough to get the camera out, but it was mum's first, so that was a hit.

We did another 3 mile walk north of Ullapool, at Braebag. There are caves here. We saw a merlin and a few deer quite close across the river, so that was rather a treat. 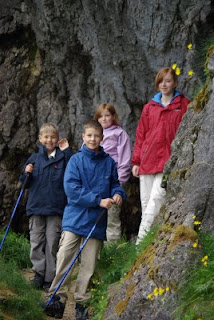 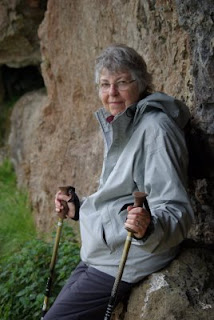 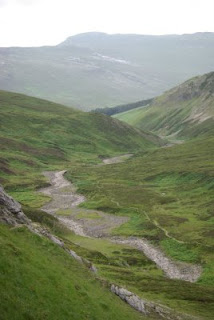 Mum.
The way up.
A few days later, we had the opportunity to take the boys out on their own, so we did another little walk! This time, the lure was a plane crash site, at the Fairy Lochs at Badachro, above Gairloch, but it's only 3.5 miles, if a little uphill and boggy for the first half. There's a glorious sandy beach by one of the lochans over the top, about a mile and a half from the sea. Bizarre, but a nice picnic stop. T'was a little showery that day, but hey ho, the boys are good, they don't mind weather.
We got to have a little adventure on our own too. We just happened to have packed our rucksacks, two man tent and a little camping gear, just incase such an occasion arose. We set off on the Fairy Lochs walk in reverse. At the beach we'd previously lunched at, it started to rain in earnest, so we donned the waterproofs and had some relief from the blessed midges. Oh my, they were out in force this year! We left the Lochs path here and struck out on the path to Torridon, I suspect quite a picturesque route, had it not been so damp. Saw a lot of bright orange frogs, think they were enjoying the weather. At roughly NG 818 690, we peeled off this path or what was left of it, and struck off 'off piste', as David had put it in the planning stages.
"We'll climb this little slope up to a perfect pitch," he said.
"I don't like the look of that slope, it's too steep for me with a big pack."
"It'll be fine!"

He thinks I can't read a map.

I was right, I didn't like it much, he was well cursed and the air was a subtle shade of blue when we got up there. But then, I am a wimp. This is his idea of therapy to cure my vertigo. Didn't work.
However, his idea of a des res isn't the same as mine either. T'was a little boggy to say the least. When his best option was to pitch on a flat rock bed, I thought he was barking mad. As it turned out, it worked, didn't notice the hard surface at all through my prolite 3, but did notice the slope and that I was the only one sliding down it. Typical! Luckily, there was no wind that night, so the rocks on the guys held the tent down easily, but David got eaten alive by the midgies while he cooked dinner and made hot chocolate. I had added protein in mine, apparently...

Next morning, I decided on an escape route as I didn't fancy the route back down the slope and carrying on round the hill through the heather and bog. It worked quite well, as the trig point hove into view that we pass below at the site of the plane crash, so we knew exactly where we were and navigated to join the path down to Badachro steading.

It was a relatively short walk, about 8 miles in total and I haven't calculated the ascent, but it wasn't much. The idea was to navigate a route rather than using a known route, wild camp and navigate back. Added to that, we implemented an escape route, which we planned and navigated enroute. On the whole, I was pleased with the way it all went and have a few ideas of what I might change or leave out of my kit, so a success, if only a small one. Saw another merlin, which made three including the one we saw up the hill behind the house on an evening stroll with the boys. 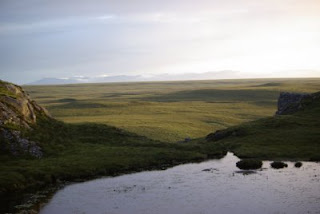 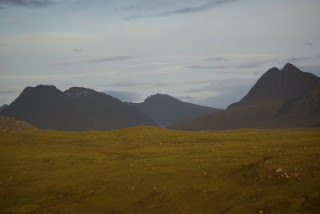 The view from our des res.

We all survived the holiday, it wasn't what we'd normally do, but we did have a couple of boat trips with Ian and Sam French at the Gairloch Marine Life Centre, which is always a highlight. 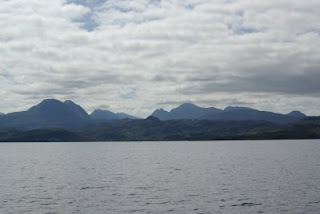 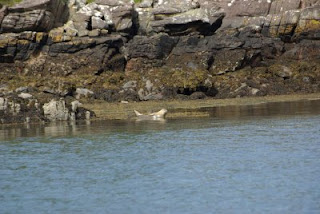 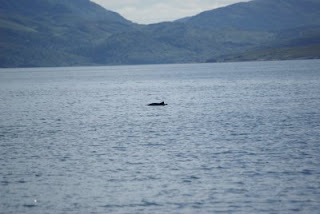 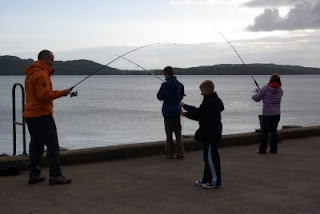 View from the boat.
Bananaring common seal.
Porpoise.
Fishing on the pier.
We'll be back next year, because we love it!
Posted by Louise at 18:37 2 comments: