There was a fearless foursome that gathered at Dallas Dhu Distillery last night at 7 pm. It was still raining quite persistently, but Angela, Alison, Judith and I paddled through the puddles and waded through the mud for our own entertainment for a pleasant couple of hours. No, really, we did.

The height of the excitement was a group of escapees blocking our path. Five young cattle had made a bid for freedom and caused a little consternation amongst our number, but we eventually made our way quietly passed them as they huddled against a fence. Shortly after, a small car came tootling towards us and we tried to flag them down to get help, but they thought we were waving and waved back on their way passed. Glad we weren't drowning. Then they spotted the calves and stopped. They were stopped for quite a while, so we thought they must be making an appropriate phone call and left them to it.

The Mosset Burn was in spate, which was quite spectacular in places. Very noisy too.


A chap in a shiny, silver landrover passed us. Several times. We weren't sure if he was a gamekeeper or a stalker, but he gave a friendly smile and a wave as he drove by. He probably thought we were a bit daft.


It took an hour and forty five minutes to walk 5.3 miles, so roughly our average speed, despite the unexpected livestock and fords we had to contend with. Thankfully, there were only a couple of lace tieing stops and no pee/water/snack stops. Can't imagine why...


A thoroughly pleasant pootle, despite the weather doing it's best to dampen our spirits.
Posted by Louise at 07:46 No comments:

Today, the boys, Ciara and I took a stroll down to Findhorn to do a bit of Geocaching. Laura reminded me we'd joined up so that I could trick encourage the little treasures out for some fresh air and exercise, so off we went with two caches downloaded to the GPS. As usual, I forgot to take photographs as evidence of our finds, but I did remember to take a pencil to write in the log book and a couple of items to leave behind.


Whilst we were hunting for the second cache, we found this little chap 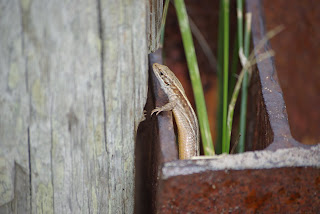 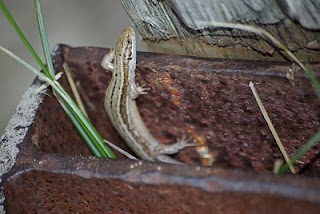 Isn't he cute? A little Common Lizard, but you can't tell from the photograph, he'd obviously had a falling out with something before we found him, the tip of his tail was missing. Didn't seem to be bothering him!

I'll have to download the ones in Culbin next, the children quite like it there. Well, three of them do. Number one child doesn't like 'the outdoors'. I'm convinced she was swapped at birth!
Posted by Louise at 18:18 4 comments:

Saturday, 3rd July saw me be dropped off at Jo's at 9am. We went on from there in Jo's car to collect Angela and Sally, then onto Knockando Church, where we abandoned the transport and took a bridleway down to the road and off to join the Speyside Way. I haven't done much of this long distance route and certainly not in this neck of the woods, so I don't know the area well.
The path takes a gentle, meandering route to Aberlour, where we found real, porcelain toilets (woo hoo!), dribbled and drooled in the rather fabulous local deli (why did I take a packed lunch?) and found a pub. A real pub, with alcohol, toilets, outside tables and everything!
There had been an earlier mention of "It's a beautiful day, we should be drinking Pimms and lemonade!" so, we did.
It was lovely and would probably explain the rather raucous behaviour as we continued our walk a short while later. We visited the play park on the way to the horrible bridge, some of us let our inner eight year olds out, (one of us didn't...)
Not long after crossing the bridge, we found ourselves panting up a hilly bit that some of us weren't expecting, (the holder of the map had kept that a secret, or was it a surprise to her too?) and then we met a junction we weren't expecting. As luck would have it, we knew where we were and that we weren't where we had wanted to be, but with a minor correction downhill (!) we would be where we did want to be, so off we went.
The main theme of the day was "Wow, what a fabulous view!" which cropped up at every turn. It was an absolutely stunning day, sunny and warm with a fantastic breeze, enough to cool without being too chill at snack stops.
Apparently, we are all architectural experts and some of the homes we passed didn't meet our high standards, but some were lovely. The secret walled garden was beautiful and we each put forward our ideas as to how best a house and gardens could be placed within it. Actually, it was mainly positioning the house to allow for poly tunnels, vegetables, fruit trees etc., no designs for the house were mentioned, except the view had to be good!
The "Sally Effect" prevailed and although there was the odd spit of rain, it came to nothing and other than the occasional fleece being briefly donned in breaks, the weather was perfectly behaved.
When we got back to the car, we took a wander around the church yard. It is a particularly pretty and unusual church with an ancient church yard and we searched for graves that might have belonged to the previous owners of the walled garden and surrounding grounds. We concluded it might have been the Grant family, maybe not surprising considering the area we were in.
It was, all in all, a wonderful day. We're getting good at this!
14.1 miles
2.7 mph average
1,162 feet total ascent
5 hrs 16 walking
Some breaks (untimed!)
Posted by Louise at 10:22 No comments: