Four walks and a wonder

Sunday 21st March was a mini-girly walk. Not everyone could join us this week, so we arranged an extra walk. The walking is becoming less important than the gathering of friends perhaps, but for me, the friends make the walking extra special, so I don’t mind.

We did a shorter, more gentle route because we had Hoppy along, although she’s hopping less now. A total of 5.85 miles and 265 ft of up  at roughly 2.6 mph in a circuit around Altyre on a very lovely day.

The second walk was the regular Monday route with Angela and Louise, although Angela did a shortened version. Again. The remaining two managed  5.95 miles and 255 ft of up at roughly 2.9 mph in the circuit on another jolly pleasant day.

David, the boys and Ciara joined me on Saturday, 27th, for a circuit around Bridge of Brown on the Glenlivet Estate, part of the Crown Estate. It was a beautiful day when we left home, but as we got higher into the highlands, there were dark, threatening clouds gathering that I didn’t like the look of! When we parked up, we decided to walk anyway and three of us donned our waterproof jackets in readiness. The other two were foolhardy. 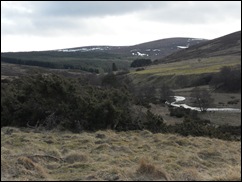 There was plenty of snow around, but very little on our actual route. We saw several pairs of lapwings in display flight and tons of frogspawn in streams and puddles along our decidedly boggy path. There was a keen wind for a good part of the walk, but not too much of a bite, in my Smartwool base layer, Montane Dynamo and Quattro, I was just comfortable. 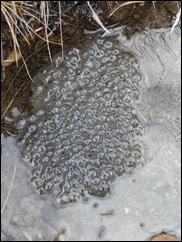 Sadly, we saw evidence of the harsh winter conditions, three dead roe deer. One looked as if she had just curled up and given up. There was also evidence of  the fight for survival of other deer. Any fallen tree or branch had been stripped completely bare by nibbling teeth and even the odd branch hanging down low. I’ve never seen it quite so much before. 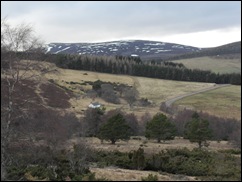 Sunday, 28th should have been a mini-girly walk today, but ended up being just Angela and myself. We had a fine time doing the same route as last Sunday, except we didn’t have the Sally effect. It’s always rains when Sally isn’t with us, it tried hard, on several occasions, but didn’t dampen our spirits! Same stats as last time, except 2.8 mph. I breathed while Angela talked!

Tuesday, 23rd. Ah, well, I sometimes join a friend of mine when she walks her dogs. Well, I say dogs. Zacky is a collie cross and he is a lovely dog. Coda is a Leonberger who is  also a lovely dog, if a little more imposing. He tends to be referred to in our house as a small, hairy donkey, or a walking hearth rug. He’s huge! And very affectionate. I’m usually covered in enough Coda hair to make another dog. Lovely! Recently, Christine has taken on a third dog. Another Leonberger, a female with the unfortunate name of Crumpet.

Anyway, I joined them all for a walk in Culbin Forest and as we left the car park a couple and their small, insignificant dog was taking our proposed route. We were courteous and took a different path and having had previous experience of the Culbin Effect, I picked up an official leaflet with a map, so we didn’t get lost.

We still found ourselves navigationally challenged, and wondered on several occasions exactly where we were! I’m convinced the markers don’t match up to the map…

We totalled roughly 7 miles (hard to be exact, the GPS switched itself off, again, even with a new battery…and I wasn’t exactly sure of our route when I looked at my map at home…) with roughly 183 ft of up.

At least it was a nice day.

Reasons to be cheerful, one, two, three

1. I have an easy life, the depression is more lifted than otherwise (all that walking)

2. I have an excuse to drink champagne (Tattinger, of course)

3. I passed my photography course (that’s the excuse for the champagne. The best I could come up with)

Did someone mention champagne? I’m off! 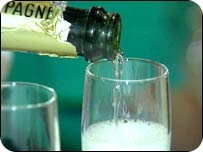 A little rant and a nice walk

I’ll get the rant over and done with, then I’ll feel better. It doesn’t affect anyone except me, so it is just a little rant, but,

…I’m really fed up with sitting in my own lounge, at the front of my house, with internal doors  and windows shut and still being able to smell next door’s cigarette smoke as they stand by their back  door and fill their lungs with lots of nasty chemicals. 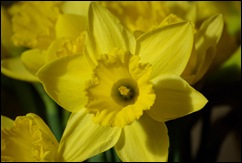 A daffodil from my Mothering Sunday bunch.

I really enjoyed my little adventure today. I took myself off in the car to do a little walk I’ve done before, but not alone. It’s part of a bigger walk I’ve done twice, with the girlies and with David, only the first time I tried to do the longer walk with David it became apparent I had a problem with my heel and we had to bail, thus taking this shorter route.

A circuit from Dunphail via Johnstripe and the Divie Viaduct of 7.8 miles, 650 feet ascent, 2 hours 25 minutes at a rough average of 3 mph with 15 minutes of pause time. 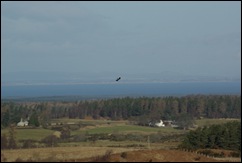 A lapwing in front of the view of the Moray Firth.

I saw snow, but only had to make my way over a small patch of about 8 feet by a gate which, handily, was open. There were lapwings in display flight, a roe deer slipped between the trees and out of sight, a kestrel hunting and lots of signs of spring. 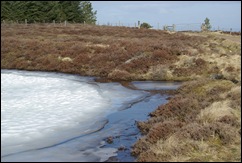 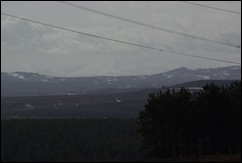 If you look very carefully, above the dark hills and below the clouds and the power lines, there are snow capped hills. I’ve been told it’s the Cairngorms, but didn’t take a compass reading to check that. Doh! 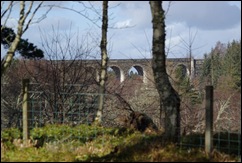 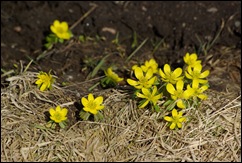 It was only a little walk, on a beautiful, if a tad windy day, but I was pleased with myself for walking alone somewhere I wouldn’t normally. No great shakes, but I only walk alone locally, so maybe I’m growing up!

I have a guilty secret

I’ve walked a couple of times this week, the usual Monday circuit with Louise and Lyn and my usual 5.5 mile local circuit today. Nothing stunning, but I did break my 17 min/mile average speed today. Got it down to 16.3 min/mile. Might not be much to you, but I was quite chuffed! It is a relatively flat route, so really not taxing, but I wouldn’t be able to make that speed if I was walking with friends. I can’t walk, talk and breathe beyond 2.9 mile/hour, unlike Angela, who I swear can breathe through her ears.

My regime is working, my walking trousers are now a far more relaxed fit and I couldn’t resist trying on the pair in the next size down. Snug, but on and I could bend down to do my boots up, yey! Progress.

I probably didn’t mention that we bought a one size fits all present for the children last Christmas, against all my best principles. A Wii. Eeek! I’ve resisted computer games, Playstations, Gameboys etc., and they don’t have televisions in their rooms. They are allowed music, I’m not entirely mean.

The last time I was walking with the girls, David nipped to my favourite supermarket and purchased Wii Fit Plus. If nothing else, I thought, there are some completely different games to entertain them, might even help improve their posture and balance. Apparently, it’s quite addictive. I can ‘feel’ my glutinous maximus quite a lot now and I noticed my right hip wasn’t at all sore on my stroll today, so that’s got to be a good thing.

It’s Mothering Sunday this weekend and our eldest daughter has been pestering my as to what I’d like. I’ve wracked my poor, exhausted brain cell and can’t come up with anything. I wanted something that I’d enjoy and keep as a reminder of our four wonderful children, but I’ve decided that what I’d like most is a lovely, relaxed day together as a family.

And a nice roast dinner that I haven’t cooked (David makes a mean roast too).

That’ll make for a good day.

(Did you spot the guilty secret?)

We went for a girly walk yesterday, a version of the Culbin walk we did in April last year (I think). There were seven of us altogether and I used our old camera to record the event. I wish I’d taken my new one, the photographs are dreadful for some reason and I can only blame myself.

Jo, Judith, Sally, Alison and I met in Lidl’s car park. Useful place that, always empty. We took the path to the bridge at Broom of Moy, then continued on our merry little way to Kintessack. At this point, we had to telephone the reprobates, Angela and the New Girly, Sarah, because Angela (still a little Hoppy) had kindly allowed us two and a half hours to cover three miles. I know we’re a little out of practice, but hey, that’s an insult! Turned out they couldn’t meet us any earlier because they had to wait for the Other Louise, who was still going to join us at that time.

We planned a ‘scenic route’ through Cloddymoss to kill time and arrived ten minutes before midday, just in time to meet Angela and Susan, have  a toilet stop, (the PC was unexpectedly open mid-winter, so you have to take advantage!) and lunch. Well, second lunch, we’d had the first at Cloddymoss… 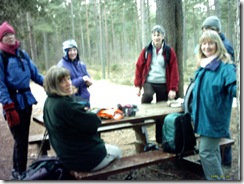 We decided to shorten the route, despite Angela wanting to go to Binsness via the Gut, and took a more direct route. We are taking care of her strained ligaments whether she likes it or not!

We walked and chatted to Binsness, then continued on until we could leave the track and Angela could see the sea(it’s like walking with a child sometimes!). We had snack. A seal came to say hello, maybe it’s in the background of this photograph? 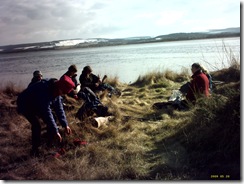 (Yes, I know, it’s sluds. I have no idea why, I only had cocoa in my flask, honest! Could have been the whisky in the home-cured salmon in my butties…)

We walked on, not believing Angela that her knee was fine, until eventually she caved and thought she should go back to the car via Earnhill, with Sally, while the rest of us carried on.

We took the track over the bridge that takes you down to the ford, then took a wrong turn somewhere (doh) before Judith voiced her concerns and we turned around. We hadn’t gone too far the wrong way and perhaps if we’d realised sooner, would have been in more shelter when it snowed. Eventually, we arrived at the bridge at the Broom of Moy again and soon returned to the car park.

Overall, those that did the whole route did 15.1 miles with 313 ft climb (odd, not sure about that), we took just over 4 hours with 1 hour 30 mins rest stops, with entertainment provided by my new emergency group shelter (group emergency shelter?), not that we used it, we just got it out for a giggle. Like you do when a group of grown women on a Sunday afternoon stroll, ahem.

Extremely good fun all day and slightly riotous at times.