One of the first things I learnt when I moved to Scotland (15th October, 1993) was that Hogmanay, New Year’s Eve to some, is bigger here than Christmas. They really go to town on it and sure know how to throw a party!

I’ve got a bottle of Glenmorangie at the ready and some shortbread fingers stashed in a safe place, lest they be found and nibbled in advance, but I’ll giving the lump of coal a miss. (Would be a waste without a real fire to burn it in.) My Tattinger has been chilling for a couple of weeks, so should be perfect tonight.

I seem to miss the point, everyone else is piling their trolleys high with goodies, nibbles and enough alcohol to comatose an entire country, whilst I was stocking up on the essentials, flour, milk, fruit and a box of Stella (?!? Wasn’t me!) David collected us, dropped me off to walk home and collected children and sledges before beeping his horn on the way past.

Only two and a half miles to home, but through snow of varying depth, so a good work out I thought and I got home between sleet showers. It’s been snowing, sleeting, hailing and raining on and off ever since, so we’re now mid thaw and at that miserable wet, dirty grey stage. Not a nice way to bring in the New Year. Hey ho.

Anyway, Happy New Year to everyone/anyone out there and wish you all the very best in 2010!

According to the forecast

Yesterday, we were forecast blazing sunshine and subzero temperatures, with possible light snow showers from 3 am this morning. 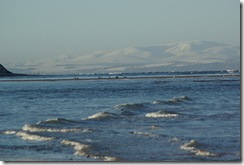 Culbin Forest peeping out on the left, Ben Wyvis with snow and seals on the spit of land inbetween 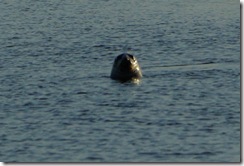 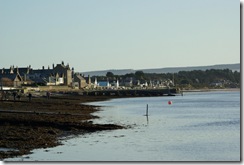 Along Findhorn from the harbour 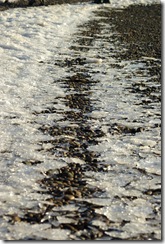 Ice along the beach

So, it started snowing around 3 pm yesterday afternoon, paused during the evening and appears to have started again with some determination during the night. Hey ho, at least we had a stroll on a frozen beach yesterday and I’ve enough food and wine in to avoid a trip to Tesco with all the mad trolley people.

I did have a stroll last Tuesday, my regular weekly walk during term time  with Angela or Louise or both, if I’m lucky! Usually about 6 miles long around our local area, but last Tuesday, it had been snowing. I had taken my little daypack instead of my bigger daypack and that was a mistake. Gaitors proved to be a good idea and I paused to put mine on just before we set off, but the timing was poor. After successfully fitting one, my fingers were too numb to put on the other, so Angela stepped into the breach whilst I put Merino *flappy mitts and ski mitts on and Ailsa whined (six month old beagle pup, quite a cutey if a tad untrained…)

Off we set and my fingers became less numb and then more and more painful. After about, ooo, I don’t know, half a bloomin’ mile, it became obvious I was going to have to stop before I fell down, my body had gone into shock with the pain. Stupid and pathetic, I hate it! So, there’s me, crouched down by the side of a busy road, feeling a complete plank. Luckily, Angela has some idea what it’s like, she also suffers from Raynaud’s but she doesn’t go into shock, clever girl. She was very encouraging and practical and incredibly sympathetic.

We decided to head back to Louise’s, which took a while with stops, so that I could recover and then try again, after a cup of tea and a biscuit. We were able to have a quick walk before lunch which was through a lovely winter wonderland. If I’d had my bigger day pack, my hand warmers were languishing in the bottom. Pah!

*I have a pair of fingerless gloves with a flap to make them into mitts that I’ve knitted in Merino wool. I’m going to knit some more because they are incredibly useful and I’m wearing them out!

The weather, that is.

Not a bad Christmas in itself though. Back to our usual, totally selfish, ‘just us’, none of this faffing about with visitors, or trying to get somewhere else despite weather and strikes. We tried having a visitor last year, it was okay, just not as relaxed as usual.  We had good reason to invite mum, it was her first Christmas since dad died unexpectedly four days before Christmas the year before, so we thought the children would be an excellent distraction for her and it was.

The weather is trying, however. We had snow, as previously mentioned, the weekend before Christmas. This meant the girly walk was cancelled due to common sense prevailing. We had a huge thunder storm, with rain and everything, on the 23rd, but then it froze. And I mean froze. It’s not been above freezing for more than a couple of hours since and has been into minus double figures at night. There’s sheet ice from the doorstep and beyond and so I’ve been trapped. For a girl who can fall over fresh air, ice is not good.

We have a few inches of snow now and I was all poised for some fun in the snow wearing a cosy combo of bamboo, merino, Montane and Peter Storm, but my sensible head told me to speak to to Angela first, as they live in them there hills.

Unfortunately, as anticipated, they have much more snow than the coast dwellers down here so, unless I wanted to walk alone, the dawdle is postponed.

And I've got all those Puddini Truffles to put myself on the outside of. They've as much chance of getting through Christmas as a turkey, (courtesy Kirsty, again).

Perhaps we won't pop down to Glenmore tomorrow either, conditions might further hamper our already restricted time. Pants.

Or, worse still, the schools might be shut. Quelle horreur! That would be a huge cat amongst the pigeons, I've presents to wrap.

Nine out of ten

…people love chocolate. And the other one is lying.

(Kirsty Allsop said so, before anyone notices I nicked it.)

Anyway, we’ve got a pre-Christmas dawdle tomorrow and I’ve made some of Nigella’s Christmas Puddini Truffles as a Christmas treat for my bestest friends, (I’m known as the gourmet foodie and wine expert. No idea why.) We normally walk on the last weekend of the month, but figured next weekend we might not feel like it, what with one thing or another.

So I’ve been having a laugh at everyone's expense down south of the border as one snowflake sends the media into a frenzy and here in the north of Scotland, not a single one was to be had. Snowed a fair bit this morning, but it was too wet to settle, ah ha! Then, the temperature dropped like a stone and we had ice like sheet glass everywhere and not a gritter in sight.

Although Angela has an excellent sledging hill in her back garden…

…is like wetting your pants. Everyone can see it, but only you know how warm it is.

I was out with my walking girlies last night. We had a ball, no rain filled, raging streams, boggy footpaths or gales, just good food, a little gin and lots of dancing.

Friends are good to have.

My busy morning has been disturbed.

I’ve been good today and it’s only 11.20am. I’ve started the washing in the washing machine, just got to remember to get it out again. Soon. I’ve washed up, which is always a good thing. After running out of excuses, I bit the bullet and submitted my ECA for my photography course. It’s nine days early, so if I have too many nightmares I can still make changes and re-submit. Up to 99 times, apparently…

I was congratulating myself whilst putting up the ironing board, (a day for chores today) when I was disturbed by a commotion outside. Peering out of the front window, I could see dozens of seagulls, rooks and jackdaws swooping manically at something out of my vision, round the corner of the house. They were making a dreadful racket and obviously mobbing something, then there was a dull thud from the side of the house near the a gate and our local overweight wood pigeon joined the throng.

I’m a big, brave girl, so I decided to investigate, (it’s daylight, after all). There were lots of feathers in the back garden and at first I wondered if the sparrowhawk had been lucky. I crept round the corner of the house to find more feathers and a fat, grey cat, under siege from the mobbing birds. He hadn’t noticed me and I gave him an enormous fright, bet it stung a bit, clawing his way up the fence! There were plenty of feathers about the place but no dead or dying bird, I reckon it was the wood pigeon who’s got to live another day. He’ll be easy spot, the one with half a pillow missing from his backside!

Can’t beat a bit of drama, early in the morning.

Onwards, ever onwards. Just about time for a little something.