The Knock of Braemoray, Revisited

When I mentioned to David that Laura was coming for a stroll, he suggested we did the Knock. David and I have been up this little hill before, but it was an unticked trig for Laura. As I’ve had a trapped nerve again (other side of my neck this time…), I wasn’t sure if it wise, but because of the good conditions, overhead and underfoot, it appealed. When Laura arrived, I gave her a choice of two trigs and this was the one we settled on.

Off we drove south, to deposit the car at the lay by before Dava. We swapped into big boots, turned on Viewranger and headed off, over the already broken wire fence and up hill. There was a layer of snow on top of the deep heather, but the going was alright, even though I would have prefered the ground to be a little more frozen. We made steady progress, pausing occasionally to take in the views and to study the clouds, just which way were they going, were we going to get caught in a snow shower? We kept going. At one point there was a flurry of flakes, I promptly decided to whip off my windshirt and pull on my Paramo, which unfortunately made Laura and I twins…

It didn’t take too long to reach the top of the main ascent and head up the final gentle rise where the trig was waiting for us. The views were great, quite moody, and we spent quite a bit of time up there, enjoying the view and taking photographs, but it wasn’t quite the place to stop for lunch so we decided to head off back to the car, but this time we’d go down the way David and I had climbed up last time, just to make a circuit. 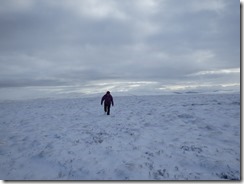 Laura, making her way to the trig 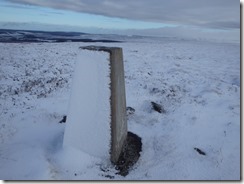 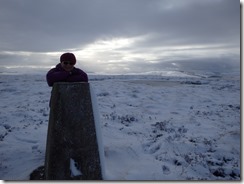 Laura at the trig, smiling…honest! 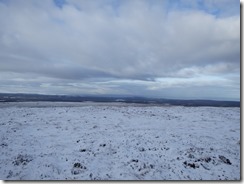 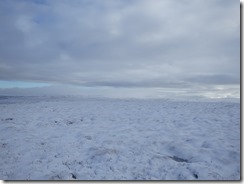 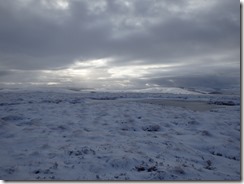 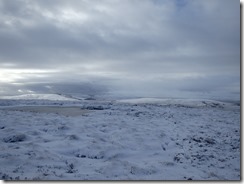 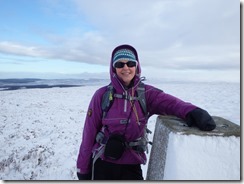 What fun we had! It was certainly quicker for us to get down than David and I had been going up, and boy did we have a laugh, but there weren’t any misshaps and we were soon back at the car, swapping into our cosy boots and heading for tea and scones. 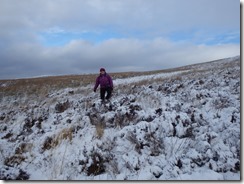 Laura, bowling down the hill

It was only a short walk, 1.57 miles roughly and 514 foot ascent. It took us less than two hours and we had a whale of a time. Thank you Laura!!