Laura and I had an opportunity, the last opportunity before the Challenge, to walk together, so we took it.

We originally planned to meet in Aberlour, but as the weather was not playing ball, plans changed and I drove to Laura’s. On arrival, we chatted a while. After quite some time, we looked out of the window and decided to carry on chatting. After some more time, we decided we were just taking advantage and that the weather was in fact improving, if we didn’t get out and walk it would be too late! We left the house.

We parked in Aberlour, not where we had originally planned, had the obligatory faff, and set off uphill (why?!!) We continued round and uphill on this road until it eventually turned into a track. We stayed on this track until it turned into a path having an identity crises, it definitely thought it was a burn. Or a river. But all this was good practice and felt remarkably Challenge like, except for the lightness of our packs 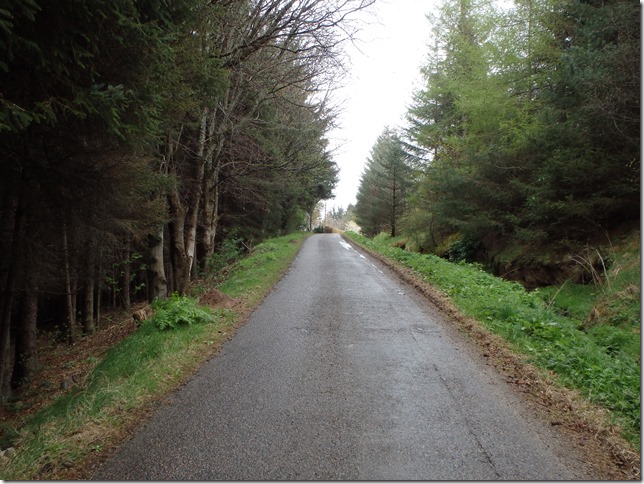 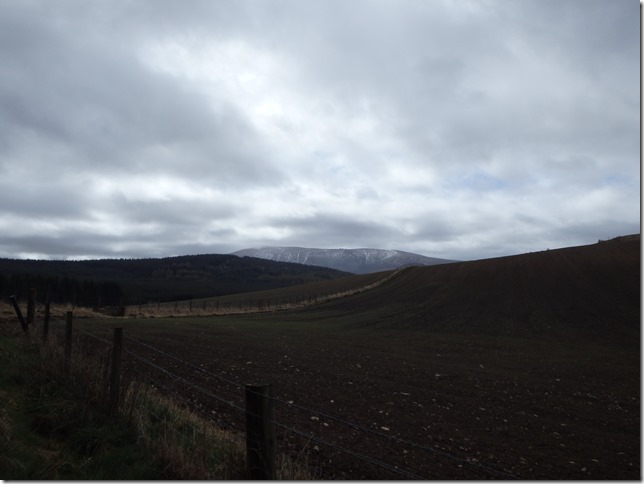 View across farmland to Ben Rinnes, with a little bit of remaining snow 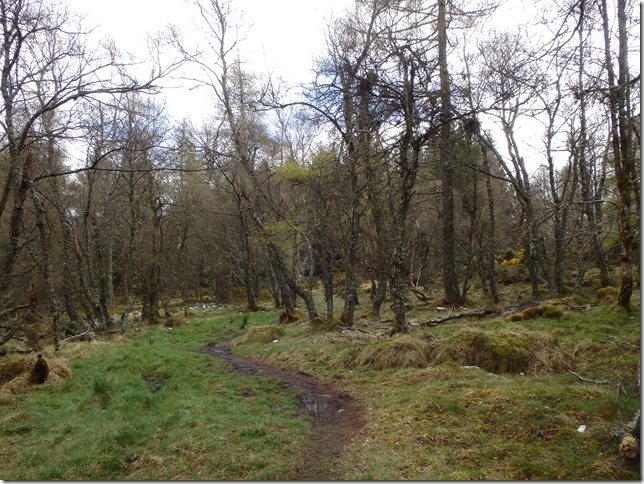 Winding track through the birch trees, before its identity crisis…

We continued up through forestry and birch woods until we popped out the other side and downhill, through a gate and stopped by the bench that Laura had promised me, where we sat and ate lunch gazing towards Dufftown and the hills of Glenfiddich Forest beyond. 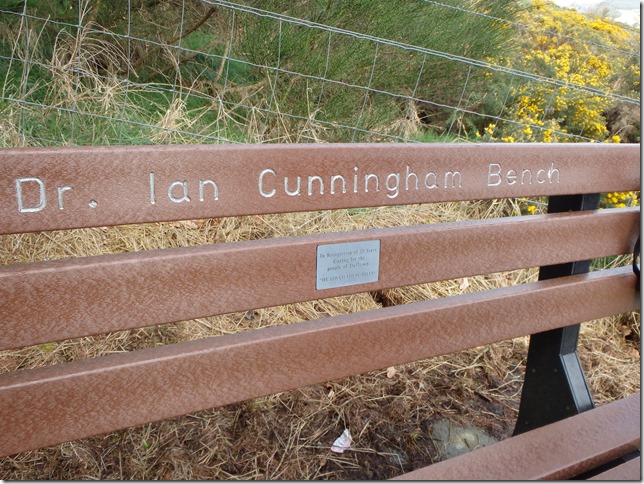 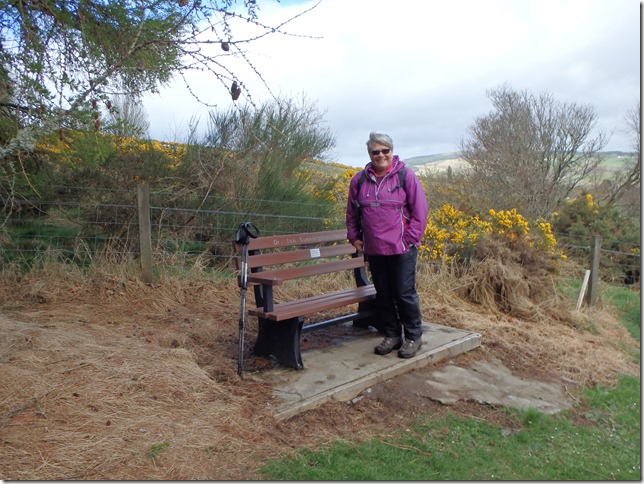 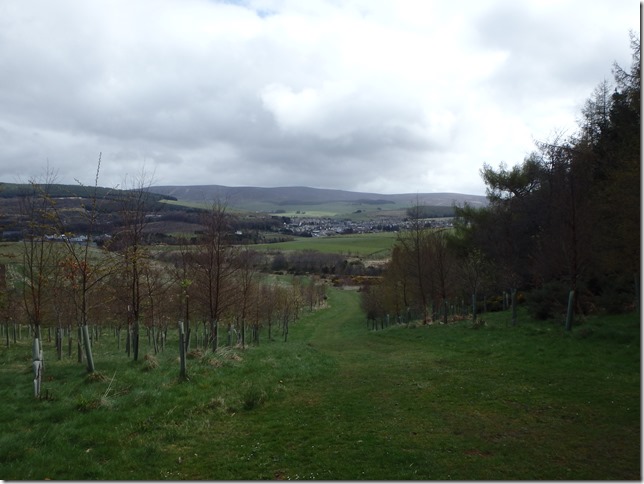 The view over Dufftown and the Glenfiddich Forrest hills.

We enjoyed a pleasant lunch, sheltered from the cool breeze by the birch woods behind us, then we set off on the return leg. Once we hit the tarmac, we became aware of the weather, slowly tracking us down. We were glad to be heading downhill and therefore at a good pace. The rain started just as we reached the van and piled in. 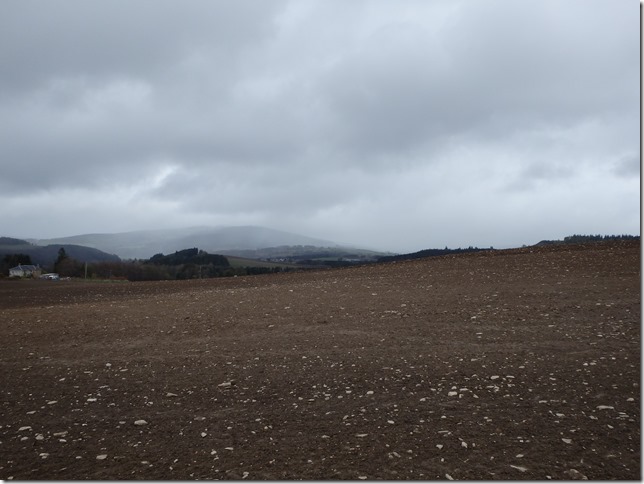 What a great little walk, thanks Laura, thoroughly enjoyed some ‘proper’ walking for the first time in a few weeks, and I think we’re both ‘fit’ and ready for the Challenge. Bring it on!

Preparation for The Great Outdoors Challenge 2017

I had no intention of applying for this year’s Challenge, or indeed for any future Challenge. It was just the decision I had reached. However, a week or so before the deadline for entries, I had a complete change of heart and with David’s agreement, entered. A couple of weeks later I heard that I had, yet again, been lucky and gained a place on the Challenge. Whoops!

As luck would have it, I did have a route planned that just required a bit of minor tweaking to be ready to submit and was fully vetted by the end of November. For the last four months, it would normally just have been a matter of research and details, but I had the added excitement of having found I’d developed an Inguinal Hernia. I saw my surgeon in January who hoped to be able to operate in time for me to go ‘on my holiday’ (…he really did not understand the concept of ‘backpacking’…) but the date came through for my repair as 23rd March. This meant I would be 7 weeks post-op at the start of the Challenge, cutting things a little fine I thought. However, I had left my name on the short notice cancellation list and as luck would have it, that was the phone call I received the day I was walking with Mick and Gayle. The new date for my operation was 9th March, meaning I am currently 5 weeks post-op and I will be 9 weeks post-op when I leave home for my start point. As the advised recovery period is 6 to 8 weeks, I should be fully recuperated and raring to go by then.

I am making a good, steady recovery. I now have no pain to speak of (if I poke the scar hard enough, I can still feel a little bruising, but I don’t tend to do that) the general swelling, of which there was more than I was expecting, has gone, with just a small amount remaining under the scar itself. I am beginning to gradually phase back into the things I haven’t been allowed to do, I am driving short journeys now, emptying the dishwasher a couple of plates at a time, taking smaller items from the shelf at the supermarket and contemplating doing a little light housework, although I wouldn’t hoover or cook a family meal for all six of us yet. I’m quite sure in four weeks time I’ll be ready to heft that 12.5kg rucksack…as I ever am.

I left the house for the first time nine days after the operation, just for a little trip to the supermarket, but built up from there and two weeks later I was back to my normal length walk, although not up to my usual speed. That doesn’t worry me, I’m walking at Challenge speed, so this is a good thing!

I have my Challenge main meals from mountaintrails.org.uk as usual, the main snack items are stashed in the cupboard, I have all my maps, new socks and new Meindl Bhutan boots being gradually worn in (gradually ‘cos I don’t want to get them dirty, they don’t really need worn in!) I’ve done all my print outs, laminated my route sheet, booked the only B&B of the trip and booked my seat on the bus.

All I need to do is pack.

So, on the whole, preparation for the Challenge is going well, all things considered.