David managed (was strongly encouraged) to take last minute leave this week, so as the children were in the middle of their Tatty Holidays, we thought it was an ideal opportunity to pop down to visit his family in Fife. His dad has been diagnosed with Alzheimer's and is quite poorly, so it’s good to visit from time to time as they can’t travel up here so easily. An added incentive was that his middle sister was away for the weekend and happy to loan us their house so we could enjoy several short visits over a few days, making for a more leisurely weekend.

When we returned, we hoped the weather would be good enough to do some walking, but perhaps not as much as I would have liked. I would have loved to visit Glen Affric this time of year and take a stroll around the loch, but it’s a long journey from here for a day out, so to warm up our legs on a low level walk, David and I stayed local for a walk on Wednesday around Romach Hill and the  loch there that we’ve done before. It was a pleasant enough day, not too cold, but with an unexpected snow shower! A total of 13.5 km, 315 m ascent and 3 hrs 32 mins, so a reasonably quick sprint and nothing remarkable, except none of the children could be bothered to get up and join us!

Yesterday, we attempted our third assault on Bynack More. Again, I thought we were being a little ambitious. It’s a walk that David and I could do very comfortably and even with the start of winter in the hills, I wouldn’t have been too worried. We could easily have set off at 8 am to make an early start in the hills. The problem was, this was supposed to be a family walk…

Needless to say, we didn’t set off from Glenmore Lodge until nearly 10.30 am, so it was fairly clear from the beginning we weren’t going to achieve our preferred goal. We should have made for a different venue given we didn’t make the early start we’d wanted, but we merrily made our way towards Ryvoan Bothy before turning off for Bynack Stables and stopping at the bridge for lunch. 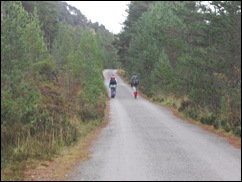 Ahead of our leader Our leader, bringing up the rear after a GPS battery faff 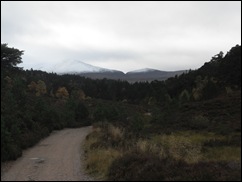 Looking south-west towards the Chalamain Gap. I’ve been there! 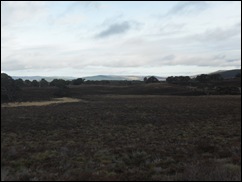 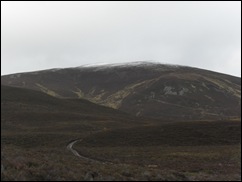 Meall a Bhuachaille, my favourite Corbett 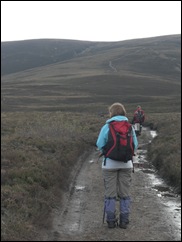 Heading for that path in the distance

It was not a bad day at the start, bright, a light breeze although chilly at times. There was low cloud around and snow on the hill tops with the risk of some precipitation and this was all going to be taken into account.

We passed several people out and about, this is always a busy, popular area. Lots of people seem to mountain bike out to the foot of the hills and then make their way on foot to the summit and back. There was a chap and a couple out with their dogs, a large group of men and a second group of  a father and three teenagers, all equipped for winter camping and a couple with their two children. Our children all carry a small rucksack with food, water, waterproofs and a few extra layers. I took the opportunity to try out my Exos to carry a few bits for them, given the conditions. I like them to carry their own gear, but not so much that it puts them off. The young family we saw had no kit with them except a small rucksack carried by the father. Maybe I tend to be over-equipped. 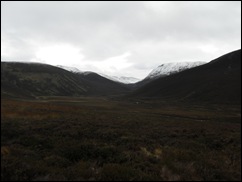 There were plenty of red grouse seen along the way and the resident herd of reindeer were seen in the distance. On way up the path, Conall suffered a clothing malfunction. The popper on his waistband un-popped and wouldn’t stay popped, thus allowing the zip to unzip and the trousers to fall down. Not good. Luckily, in my rather well equipped first aid kit, I have a couple of safety pins that were used to effectively resolve the issue. 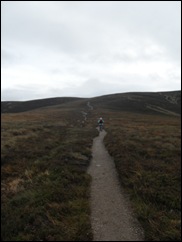 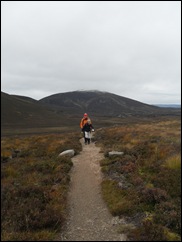 Catching up after the clothing malfunction

We didn’t make it all the way up the hill.

We reached a point where the boys both stated they’d had enough. I was pretty sure we weren’t going to make it off the hill before the weather became more moist and I’m never in favour of cajoling the children much to continue as it becomes painful and miserable for all. I think maybe David, Ciara and I have the determination and the boys aren’t really fussed.

Today, poor TTS is spending a miserable day in the city, waiting for the car to be MOTd and serviced.

So, who would be Mrs Grumpy? Well, it was me, briefly, yesterday, when our walk had a different sort of outcome from that intended, especially as this was our third attempt. I don’t want this hill to become some kind of nemesis, I have visions of just ‘having’ to pop up it as I pass by on my route, if I’m lucky enough to get on the Challenge next year.

All in all though, it was a nice couple of walks and I now know that my new Exos is indeed comfy and stays on my hips where it should be, one of my main objectives. My Paramo was also comfy and effective, but I still haven’t tried it out in torrential rain. I’d like the confidence of knowing it can cope, just in case I have to deal with conditions similar to this year’s Challenge again.

I have still been pondering rucksacks. I took the advice offered about trying out a rucksack with all my gear on board, but felt weak at the idea of doing this in the shop. I still have confidence issues and I knew I would feel too self-conscious. However, I came up with a plan.

I like to use websites that offer free P&P including returns. On this occasion, the best site I could find offered free P & P excluding returns but at a good price for both the Exos 46  and 58 in Ember (I don’t like the green). After a quick perusal of the Post Office site, it was still cheaper to pay for a return than to travel to my closest dealer (Aviemore or Inverness) and pay parking (ok, so I can find free parking in Aviemore). So that’s the option I took.

Ordered Sunday afternoon and delivered this morning, not too bad for the north of Scotland. I felt a little nervous at first and put off loading them up by doing some housework (must have been absolutely desperate!)

I tried the 46 first, but perhaps was a little too gentle and couldn’t quite fit it all in, so on to the 58. Everything fitted in neatly and logically, but I had a little room to spare. Bum!

Back to the 46, this time using a pack liner (another dilemma, liner or cover?). It still didn’t all fit, although I was more brutal (tricky when being careful) but I’m still not convinced I could, even with a bit more squeeze.

There’s nothing included that I didn’t take on this year’s Challenge, although there have been one or two swaps. I’ve packed my tent into a smaller bag and it is now quite a bit smaller. The only two bits of kit that would warrant change are my Prolite mattress and my tent. Despite the bulk, I love my Prolite, it’s comfy and robust. I would be paranoid using a Neoair or the like, especially at the cost. My tent. I’m not planning to replace Bill (my Coleman Kraz) anytime soon. He has his faults, but they are all minor and easily dealt with. He’s comfy, cosy, watertight and suits me. I don’t intend to buy another tent until David and I can Challenge together when Maisie will be replaced (I’m not hoofing even half of Maisie across Scotland, she’s no lightweight!) That could be another eight years hence. (By which time, I might need a new, smaller rucksack!)

So, a decision must be made.

It all fits in the 58 although there is unnecessary extra space. I can’t see me happily squeezing everything into the 46 to save 90g and I’m not likely to pack in extra items just because I have extra space. I have a list and I stick to it. (I have a thing about lists…)

I’m going to sleep on it (the thought, not the rucksack) and make my decision in the morning.

I’ve had a fairly random start to my day today.

For the past few weeks I’ve been missing the swifts screaming around the house tops as they hunt and the swallows twittering as they swoop around me as I stroll across the marshes, but they have been replaced by the geese as they gradually arrive in ever increasing numbers and gather in the estuary. It’s all part of the changing seasons. Sadly, with the geese come the men in camouflage with their shooty bang sticks and I tend to take a different route straight up the cycle path and back to avoid being shot!

Yesterday I was hacked off to find two of the wildfowlers’ vehicles parked on the cycle path, leaving room to squeeze by but, nevertheless causing an obstruction. I took a photograph on my mobile phone and carried on my walk, grumping to myself.

Today I passed one of the cars parked in a different place, but the other was again across the cycle path. I thought nothing much of it and continued on my way, somewhat grumpily.

As I returned about 30 minutes later (a short walk!) I could see the car had gone. Imagine my horror as, when I passed the spot they’d been parked, I find a gun, discarded by the side of the track onto the marshes!

This was urgent, but perhaps not an emergency? 999 seemed extreme.

I don’t (but will soon!) have the local number for the police in my phone, why would I ever need that?

I couldn’t raise the occupants in the cottage across the road (they are always in, why not today?!)

If  I took it home to keep safely whilst contacting the police I would then be illegally in possession of a firearm. Not good.

So, I rang TTS for advice.

After about ten minutes, the wildfowlers returned, claiming to have been horrified at finding a gun missing and returning immediately to find it. They realised they weren’t going to get away with this ‘mistake’ as soon as the local bobbies arrived.

About an hour after my find, I was “Free to go” and made my way home.

It was a totally bizarre situation, I would never have thought I would find a gun, just lying on the ground. I felt quite sick at the thought of what could have happened if it had got into the wrong hands.