I was out for my regular stroll today and I returned incandescent with rage.

There has recently been some works carried out along the local roads that appears to have been related to drainage or water works. When I walked today, I found litter along side the work sites, strongly suggesting a connection between the two. (The litter is generally spread liberally along the verge, rather than gathered in one area) There was also litter that was almost undeniably connected, a couple of plastic bags clearly labelled ‘Macadam’ next to fresh repairs on the tarmacked cycle path as well as plastic wrapping dug into the earth replaced during the works also discarded nearby.

Here is a copy of the email I sent to the council:

I have made a complaint via your online complaints form today about recent littering along the Kinloss to Findhorn cycle path, but I wish to send the photographs I have taken as evidence of the littering which has so infuriated me. The proximity of the litter to the work recently carried out along the road and the fact that some of it is undeniably connected with the work carried out leads to the conclusion that the littering was indeed caused by the workmen. I do not think they were council employees, more likely contractors or employees of the water authority if it was their work.

My son is currently undertaking a regular litter pick along this path as part of the voluntary section for his Silver Duke of Edinburgh Award and I am therefore confident that the mess will be tidied shortly. I find it appalling and totally unacceptable behaviour and whilst I think it highly unlikely that the workmen or the company involved will be reprimanded, they should be utterly ashamed that a sixteen year old youth is tidying up after grown men as a mother would a small child.

The litter in question is a mix of food packaging, cigarette packets and plastic wrapping directly linked with the work carried out. A plastic bag labelled ‘Macadam’ within feet of a freshly tarmacked repair to the cycle path is undeniably connected. The littering along this path is usually spread liberally along the way. This litter is all collected around the work sites, suggesting the work and the litter are connected.

I do hope you find the attached photographs of interest.

I do not expect any action to be taken and if I do not receive a satisfactory response, I will probably contact the local paper too.

Showing the proximity of the rubbish to the work site, although it’s more obvious in the flesh

That white strip in the background? it’s this:

Clearly stating what it once contained…

Clearly dug in to the work site

The remnants of their packed lunch?

I need to lie in a darkened room to calm down.

Or hit the bottle…

As an RAF family with long standing links with the Nimrod, the local school and more recently with the Duke of Edinburgh Awards Scheme in Moray, David, Aedan, Ciara and I were recently invited to a naming ceremony. The naming of what? Well, this… 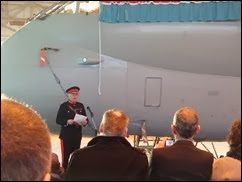 Chap in a smart uniform (Lord-Lieutenant of Moray perhaps?) doing a speech 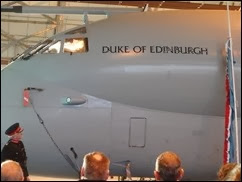 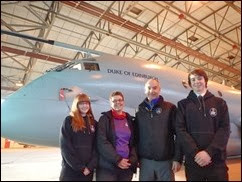 I felt honoured and incredibly proud to have been invited to this special event, the Nimrod played an enormous part in our family life until its demise and the devastating cancellation of the MRA IV. David was one of the handpicked team of twelve tasked with bringing in the new fleet.

After the ceremony, we popped the children back to school and nipped home for a cup of tea and second breakfast before David headed back to work, dropping me off at the main entrance to Roseisle Forest en route. It was a glorious day and although it remained quite frosty all day, there was little wind, so the cold never really got to me until later, much, much later… 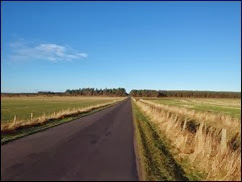 The long, straight road to the car park 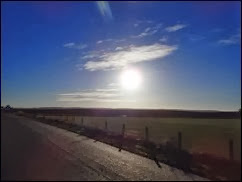 The view behind me

I walked down the road towards the forest before turning left where there were a couple of cars parked, therefore avoiding the main car park. After a short while walking through the trees, the path joins the Moray Coast Train and I turned west to head towards home. 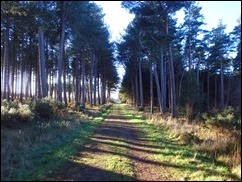 The track through the trees 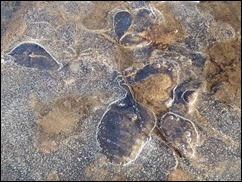 One of the many frozen puddles I passed by today

I don’t very often walk this path east to west because of the prevailing wind, but it was sublime today and I strolled along quite happily in my own little world, not seeing another soul until near the end of my walk. I decided not to call into the bird hide today, despite it being lunch time when I passed by, as I’d barely started walking and didn’t need shelter from the rain. After following the meandering path for a while, I eventually broke out from the trees and was greeted by stupendous views of the Moray Firth. 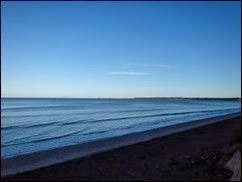 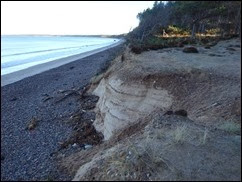 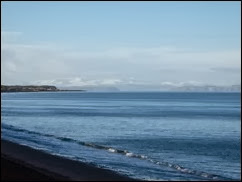 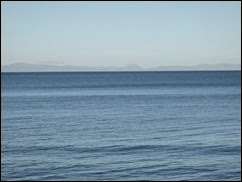 The pointy hill in the middle is Morven 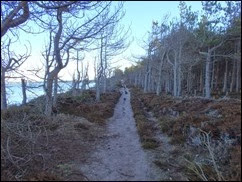 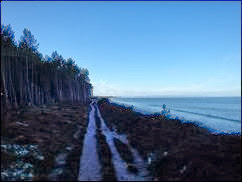 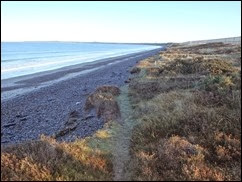 Looking east again, this was the path when David and I first walked it, not so very long ago, before serious erosion 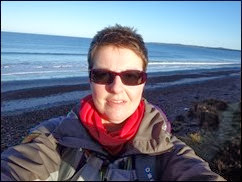 My new camera has a program specifically for taking selfies. Had to be played with! Ugh…

I continued along the trail until I’d passed the back of the airfield, when the signposted path disappeared off the cliff. It was there when Laura and I walked it, which is a bit disturbing, but I knew that if I followed the little track along the fence line, it eventually meets a bigger track that joins the trail again, so off I went. I continued along the trail a short way before deciding to take a more direct line that would pop me out on the Dunes Road, then join the main road straight back home. It was along this last stretch of track that I passed the only two walkers I met, one was on a parallel path that I wasn’t close enough to to acknowledge without shouting, would have been a bit odd, and the other was just before I popped out onto the road and she just about managed to reply.

In all, a total of roughly 7.3 miles and 254 ft, a nice little stroll on a rather wonderful day.