I went out for my walk today, just my regular little stroll, nothing exciting, but I was feeling somewhat out of sorts. For no particular reason, just, off.

There I was, just strolling along the track I call Jurassic Lane, when a small animal popped out onto the track a little way ahead of me. I am currently using my old prescription sunglasses, which are at least four years out of date, so my sight is not good in them, from what I saw of this small animal and the way it hopped out of the undergrowth onto the track and back again, I thought it was a hare. Then it hopped back out, followed by a second, but this time it took a few steps as well and this was wrong for a hare, they do not walk like that, but they both ran along the track towards me, like hares sometimes do (as they have poor vision too, unable to see straight ahead) and I was puzzled. Then, a third, larger animal appeared. Oh! I thought, three dogs? But wait, no…

A roe deer doe and her two fawns.

The doe suddenly realised I was there on the track and took off to the side, in to the undergrowth. The fawns kept coming, stopping just a few feet ahead of me as I stood, stock still, in complete awe. They took a few steps before the second fawn suddenly in to the undergrowth and disappeared. The first took a couple more steps, before hopping off the track and lying down, but couldn’t help sticking it’s head back up to have a look at me. A boy, a suspect, by it’s boldness!!

I took a couple of quick snaps, then quickly and quietly made my way along the track, leaving them to reunite in peace. 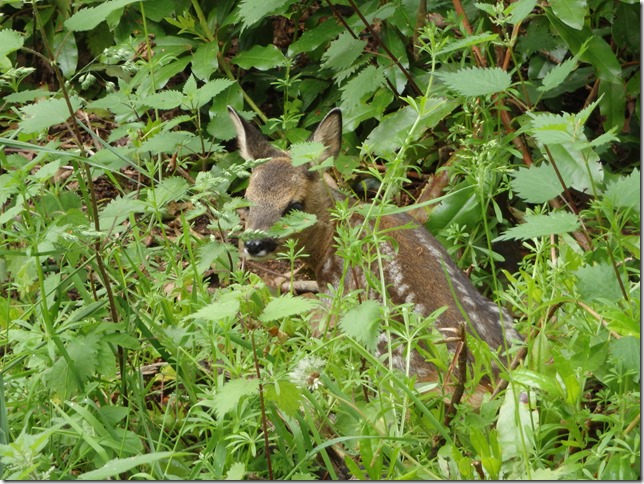 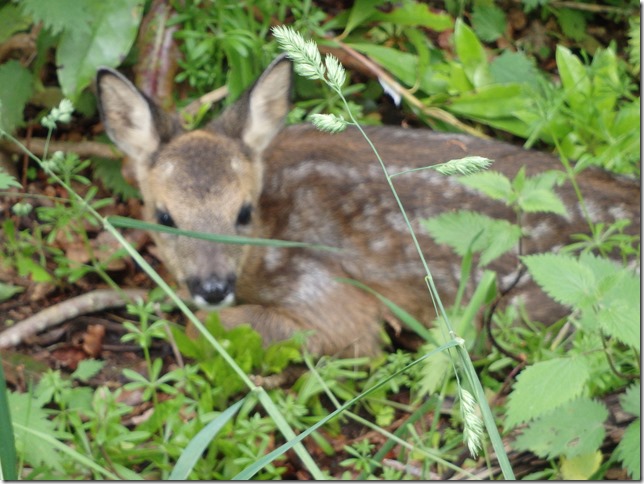 On Friday we took a group of Silvers out for their Practice Expedition, starting at Bridgehaugh, going through Glen Fiddich to Suie, then over to Tomintoul and finishing at Mains of Inverourie. It was a wet day and we had concerns about a couple of the burns that the group had to cross, not least because DofE groups are not supposed to ford. As there were only the two of us to supervise the group, David as main and me as support, we were also bothered by the lack of phone signal for the entire route on day one and the need to do a car shuffle as we had one vehicle between us. It was decided that after moving the car, I would walk further than originally intended, not just to the first night camp, in order to meet the group at the first tricky burn.

I have no photographs to post as my camera stayed buried in my pack.

The walk in from the Allenreid car park seemed to take forever. I reached the intended camp in a little over an hour, then walked on to pass two the derelict cottages and on to Morton’s Way. It was quite a dreary, wet, miserable walk, so I plodded on, pondering the burns and our plans. I met a few smaller burns that I had to consider my way across, but it wasn’t until I met the Back Burn that I realised we were not likely to get the group into camp that day. I had to do a full boots off, sandals on crossing, which wasn’t going to happen with the group. I was concerned that I needed to meet David and the group at their first crossing so I could tell them they would have to turn back.

It seemed to take quite some time to reach the zigzag path that takes walkers up to Corriehabbie Hill, further on I passed the Elf’s House (a hidden cave) and then an odd little lunch hut, all shut up against the elements. In places the path thought it was a river bed as the burn took the route of least resistance, but it wasn’t impossible. When I reached the River Fiddich, I checked my watch. The route card said the group would meet this check point at 14:30, just as I had arrived. There was no sign of them. I waited a while, fretting just a little as to what had held them up. It also occurred to me it had taken me three and a half hours to get here, covering over 8 miles and I still needed to get back to return to the start point, I could not hang about. I had a snack and a drink of water, but I was now getting a bit cold and needed to get moving. I wrote a message to David in the muddy track at the edge of the burn, “GONE BACK”, then, feeling anxious, I turned and left. Every so often, all the way, I looked behind me, just to check there was no sign of David’s orange Paramo (knew that colour would come in handy…) but he never appeared.

It was a long trudge back, not forgetting the boots off fording, but slightly quicker on the return trip as obviously I only had to remember each crossing, not figure each one out. After three hours and twenty minutes I was back at the car, taking off my wet kit and taking getting behind the wheel to return to the beginning.

A few minutes after setting off, my mobile rang, thankfully it was David, asking where I was as they had returned to the start. What a relief. Soon I was back there myself, and with the help of just one of the parents, we got all the group safely back home.

They learnt some very valuable lessons that day, so I can not consider this expedition a failure, especially as it was fully intended as a training exercise. Often groups complete these expeditions without being really tested by the conditions, without having to make any serious decisions beyond left or right path, or whose bag of Jelly Babies they open next. This group learnt how to look after each other, how to spot if a team member was maybe suffering in some way due to the conditions, the wet or the cold, from hunger or simply being tired. They learnt that the timings they put on their route cards are a really important safety feature, it turned out they’d reached the River Fiddich an hour before me, so were ahead of the route card. They learnt how to make difficult and important decisions. If there is risk, you turn back. It is always, always the right answer, to be safe at all times.

The best thing was arriving back at the start to find the group had taken shelter by putting up the fly sheet of the larger tent, all getting inside and having some food. Best of all, was they were still in such high spirits, still laughing and having fun and so pleased to see that I was safe too. What a fab group!

We’ll get them out soon, just for a quick overnight camp, then, their Qualifier in August. I cannot wait.

So, it's more than three weeks since I got home from the Challenge, have I had any thoughts of how it went?
A few.
On the whole, it was brilliant. 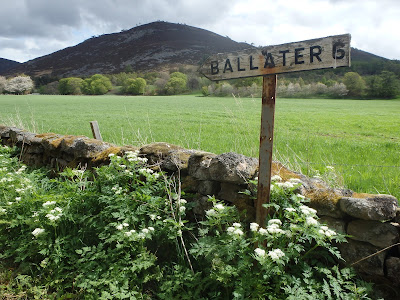 My planning was thorough and well executed. I'm getting the hang of it. I somehow managed to plan my food to  as near perfection as I think I can. I ate enough most of the time, I certainly didn't appear to suffer as much from food deprivation as I sometimes do. I think the dehydrated meals I buy from mountaintails.org.uk are the best, for me anyway, and I ate as much fresh food as I could when it was available. I mainly slept well, but I think that was down to the nights not being so cold rather than any of my gear in particular, although I do think thermal tights under my merino leggings works for me. I only had two nights in accommodation and three nights on a campsite, so slept most nights in my wonderful little Laser, however, I still have never managed a solo wild camp.
I was really excited about my route, it was covering an area largely unknown to me and I really enjoyed the new views and places of wonder that I found along the way. Even when I re-routed through Glen Tilt from Blair Atholl, I was still in unknown territory until I crossed the Geldie Burn. I was unfamiliar with the Morrone Birkwood, but I do know Braemar and Ballater quite well. 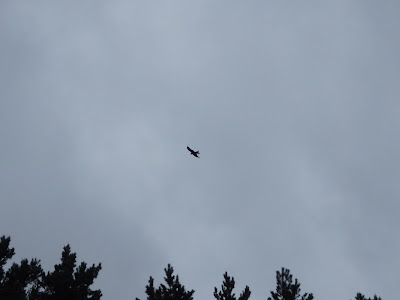 There was a change in the wildlife that I saw and heard as I made my way across Scotland. There were plenty of dippers and wagtails by the rivers, the woods were full of chiffchaffs and willow warblers and I heard a cuckoo every day as I walked. I saw ravens, a golden eagle and a kite and lots of roe deer, but no red deer. I heard a green woodpecker when I was camping at Innerwick, which was wonderful, having never heard one before. One day I'll see one, but not this far up north perhaps! On the whole, I think most of the ground I covered was more rural than usual, hence the different wildlife. 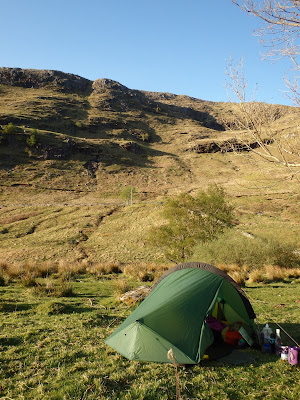 I could cover my gear in a different post, but most of it was the same as usual so I don't feel the need. I've mentioned the thermal tights already, they worked for me. This year I carried a spare pair of thinner walking socks instead of my thick sleepy socks and a pair of 'social' socks (as opposed to anti-social socks, obviously...) which meant I had choice of what to wear in bed if necessary and whether I wore an ordinary or thinner pair for walking in, depending on the weather and how much road walking was planned. I took the hat I had crocheted over the winter and I loved it, wearing it at the end of the day as I pitched camp and through the night, when necessary. I took my Velez Light instead of my regular one, which allowed me to wear my Rab Lunar top underneath in necessary or I was happy to carry the Velez Light if I didn't need to wear it, which I an not inclined to do with the regular one. I also found my Cascada II trousers very comfortable in all conditions. I still love my Osprey Exos 58, although with my new skinny collar bones, I found the need to make some extra padding to put underneath my shoulder straps. My sit mat came in handy for that. My Phd sleeping bag performed better, but I think that was down to the weather conditions. My lovely Laser is my best friend, I have no complaints at all. My Meindl Burma boots are in the same category.
There's not much else to say at the moment. If this was my last solo Challenge, (or possibly Challenge ever) I am happy that it was the most successful and enjoyable so far.
Posted by Louise at 14:48 4 comments: