I had known for a couple of weeks that I would have a day to kill in Callander as Aedan and Ciara had Higher Performance Squad training to attend. I decided it would be an ideal opportunity to tackle Ben Ledi, a Corbett and Marilyn close by. David and I had intended to do it in June when we were in the area, but it had had it’s head in the clouds and as anyone who has walked with me would know, I just can’t be bothered if there is no view as a reward for all the hard work of getting there.

This time, the weather was looking promising. For some reason, I had very little sleep the night before and wasn’t sure it would be a good idea in the end, but we set off with all my gear, just in case.

Having depositied the little treasures at the range, I pointed the car in the direction of the car park just beyond the Falls of Leny. There was a little car ballet as me and a fella were a little indecisive of where we wanted to park, then I was putting my boots on, hefting my day pack, sorting my poles and setting off towards the path before returning to the car for my watch, then setting off again. Sigh.

There is a mostly good (or at least clear) path all the way, but I noticed immediately that it goes up, all the way from the car park. Persistently. However, the views that unfold all the way up are great and I paused occasionally to take photographs and just generally enjoy them whilst making quite good progress up hill. After about half an hour, I crossed a little stream before climbing up onto open hillside with a few large boulders by the path, perfectly placed for a prolonged pause for second breakfast. I was feeling a little peckish having had first breakfast nearly five hours earlier. 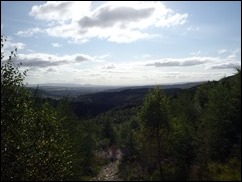 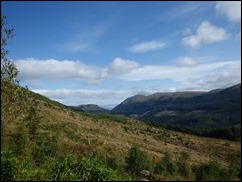 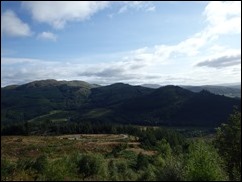 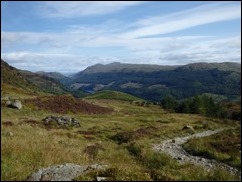 Then it was onwards and upwards, the path less engineered from now on, but mostly clear even on the eroded and washed out sections. I was quite chuffed to gain the top 2 hours and 5 minutes after having left the car park, at least 25 minutes ahead of plan. I quietly celebrated, taking photographs of the views and a selfie before having a little chat with a chap enjoying his lunch who had a arrived a few minutes ahead of me. “Time for another hill!” he said, optimistically. “Not likely!!” I thought, as I smiled and laughed and made my way off the top and down to the memorial I had passed just before the top. 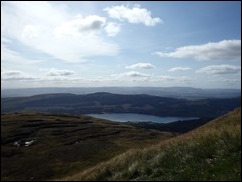 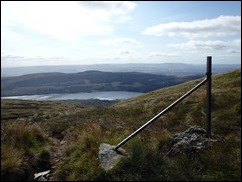 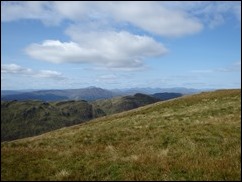 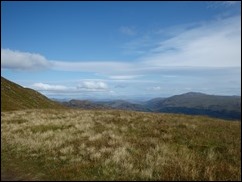 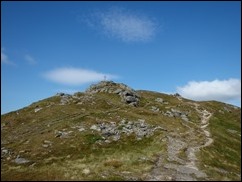 The memorial, nearly at the top 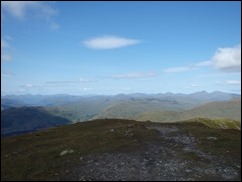 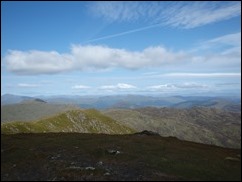 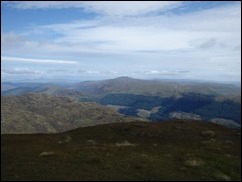 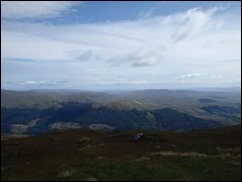 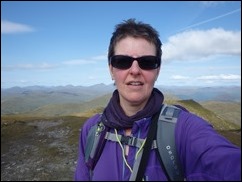 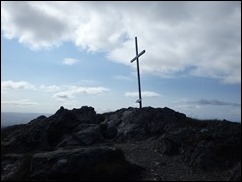 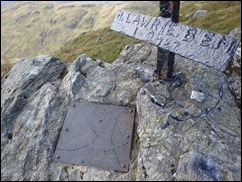 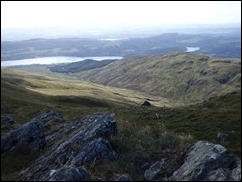 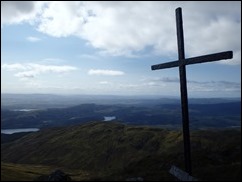 A curious memorial, a simple but quite large metal cross in remembrance of Sgt Harry Lawrie, killed whilst on duty with Killin MRT on Ben More in February 1987.

So I continued on my way down the hill. It is a steep going down as it was on the way up (not surprisingly…) and it proved to be quite uncomfortable for my right knee. I was quite happy not to rush as I am currently paying far more attention to my foot placement at the moment, determined as I am not to further injure my right ankle or exacerbate whatever is making my left foot sore (possible Plantar issues).

I should apologise to my fellow walker who possibly had more of an eyeful than he expected back at the car park. Whoops.

I have to say I thoroughly enjoyed this walk. I have a bad habit of not being terribly adventurous when walking alone, unless I am on the Challenge. Bizarrely, although I may be physically alone at the time, during the Challenge I will happily wander along unknown and unfamiliar tracks because I don’t ‘feel’ alone, there are 300+ others doing the same thing! So for me to venture onto a hill, alone, in an area I am completely unfamiliar with, is for me, quite remarkable. I loved it and had the biggest grin on my face as I touched the trig, all the glowing and panting was certainly worthwhile.

Of which failed to be friendly (so probably not Scottish…) 9

Of which solo male walkers – 4

Of which solo female walkers –1

Dogs encountered (with their owners) 5