We left home for Inverness before lunch, thinking I might have some last minute panic buying to do. By the time we’d bought a hip pouch (as I wasn’t using my Pinnacle, I knew I’d miss the hip pockets. I have an OMM chest pouch, but I find this tricky to manoeuvre alone), looked at various lightweight mugs and tried on a few soft shells, it was lunch time, so we headed for Girvans. We still had loads of time, so went on a crockery hunt (for home), bumping into an old friend in Argos, like you do. The last hour and a half were hard to kill, coffee was taken at Starbucks before returning to the car for the pack, panic pee, (not in the car…) last minute purchase of zip lock bags and water, in case of travel sickness then making our way to the bus station. The other Challengers became apparent and David chatted to a couple as I bagged a seat on the bus, then we were off. 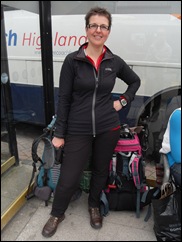 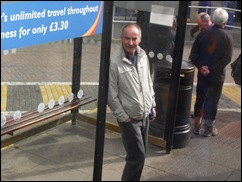 It was hard to leave The Trusty Sidekick behind

A rough journey to Shiel Bridge, which was wet and shrouded in mist on arrival. I collected my key to the Trekkers Lodge, then got lost. I was eventually pointed in the right direction and found my room, unpacked and returned to reception to book breakfast and ask for directions to the bar! There I met John and Sally Dodwell who had been on the bus and they invited me to sit with them while we ate and had a beer. When David phoned to see if I’d arrived safely, he mentioned he’d been speaking to a couple who’d said they’d look after me and it turned out to be the lovely couple I was sitting with, we had a pleasant evening.

Jane Eggleston arrived in the bar and joined us, in between ‘chugging’ other Challengers. We chatted a while and she invited me to walk with her the first day as the burns and rivers were in spate and this was one of my concerns.

After a nice meal that I was too nervous to eat, I retired to the Lodge and found some more Challengers in the kitchen area, who I believe were Ted and Jenny Spiller. I went to bed, but would I sleep?