The last time I was up my favourite hill, Meall a’ Bhuachaille, was for my 40th birthday in May 2008. In May 2010 we popped up Craiggowrie with three of the little treasures, here. Today, we decided to combine the two, a walk I’ve been planning to do alone for a while now, but we had an unexpected opportunity and took it. 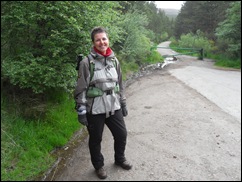 Not quite windswept and interesting, yet
We parked by the Glenmore Lodge before making our way towards Ryvoan Bothy. I have done this track so much now, and not so long ago it was quite painful. Today, it was pain free.
After a short time we arrived at the bothy and popped in for shelter while we had our snack and I took a  peek at the bothy book to see who’d passed through on the Challenge this year. 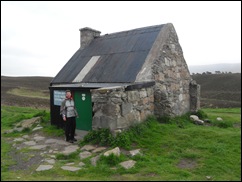 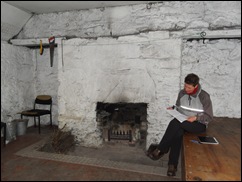 Rather a bright, tidy bothy today 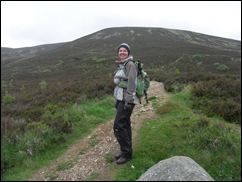 Wearing my “Christmas Cracker” hat
I was rather chuffed to be wearing my own Berghaus Paclites for the first time ever! Having put on a pound during the Challenge, I’m rather pleased to have lost more than half a stone since.
We set off up the path and I fell immediately into Pidgeon Pace. This enabled me to make it to the top with only three minor pauses, a first for me. 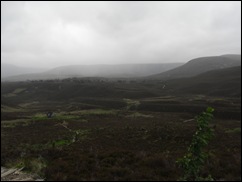 This doesn’t look too dissimilar to the last time I saw, or rather didn’t, Bynack Mor
There was some weather around. It was a bit damp and breezy and there was low cloud quite a lot of the time. 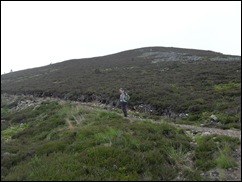 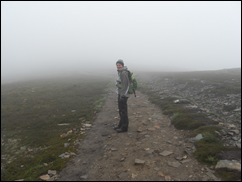 And into the gloom we go 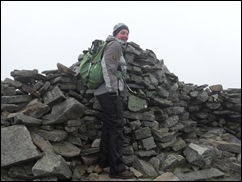 It took just short of two hours to reach the cairn 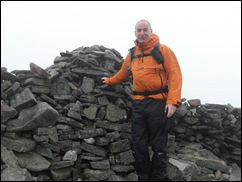 And then we struck off into the gloom again to find the path down off the other side and then up Creagan Gorm. 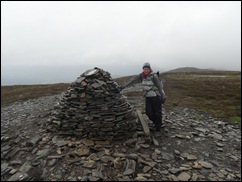 Hard to smile in the wind and rain 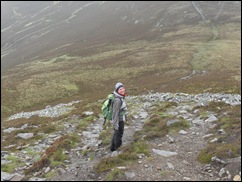 Again, I set off at a fair pace along the ridge towards Craiggowrie
At one point, I had to tell TTS to go ahead of me, I was so aware of how close behind me he was I was worrying too much about where I was putting my feet so as not to be in his way. Trouble is, He took photographs of me coming towards him instead. 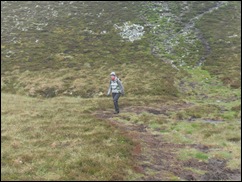 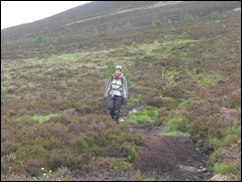 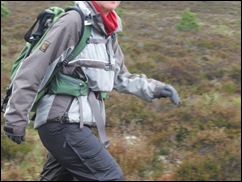 And then I’d had enough and speeded up!
We took a slight detour from Badaguish to make sure we were able to call into the Coffee Shop at Glenmore for cake and coffee. Actually, it was Danish Apple Strudel and Hot Chocolate for me, but it was enough to sustain me on our way back to the car.
10.2 miles, 2354 ft, 2.49 average mph, 5.52 hrs.
Approximately because the batteries ran out of the GPS. Again…
There was wildlife, but I can’t remember most of it. There was Golden Plover though. And flowers, lousewort, butterwort, tormentil, milkwort and orchids (pyramidal, I think, but I’m checking!)

I found it exceptionally hard to get back into the swing of things after the Challenge this year (probably partly because of the enforced rest I think). So much so I needed another get away and flew off to my sister’s in Worcester for a few days.

Largely speaking, this was a Good Thing. The only slight flies in the ointment were the cats. Cathy has four cats, all of whom are beautiful and lovely but I am allergic to each and every one of them. They play havoc with my asthma. I only resorted to Cetirizine on the second night because I hate the side effects so much, the rest of the time I tried to spend outdoors as much as possible. Considering the rain, this was a damp experience. Worcester is, however, a beautiful city and I did have  a lovely time.

Having returned, I felt it was time to get out into the hills, even for just a short walk, but I was persuaded to ‘pop up’ a Corbett, Carn an Freiceadain for a nice day out. Martin had popped up there before the Challenge but I hadn’t been well enough to join him. I think he would have been too fast for me anyway!

We parked near the award-winning public conveniences in Kingussie and set off. It felt very odd to be wearing my Brashers and carrying a daypack! Within the first mile, we found ourselves slightly navigationally embarrassed, not such a good start. I knew exactly where we were and that we were not exactly where we wanted to be, but I knew how to get there. Oops.

Eventually we found ourselves leaving the woodland and heading out onto more open hillside alongside Allt Mor. After only a short time, I had a wobble. I was completely overwhelmed by feelings of  despair and gloom. I sat on a nearby rock by the track for a few moments contemplation as the hill ahead disappeared into the clouds.

“You’re not happy, let’s go back, you’re not going to enjoy this today.”

I picked myself up, dusted myself off and strode off up the hill. 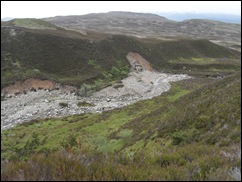 The meandering Allt Mor with signs of erosion 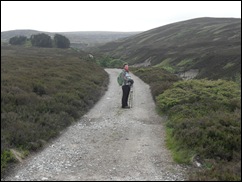 The return of Little Miss Stubborn 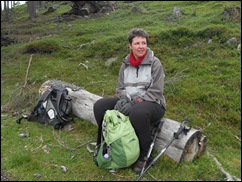 This went on for a while, with plenty of pauses to take in the view and a lunch stop. The hill popped out from the clouds again and we continued up. A juvenile golden eagle crossed high above the hills and looped behind us, the flash of white under it’s tail and wings being the give away. Several hares ran along the path ahead of us, all the way to the top. A deer appeared on the horizon above us and disappeared again and there were golden plover too.

By the time we reached the steepest tug before the summit, I finally found my Pidgeon Pace and made it all the way to the cairn without a stop. I was a bit pink when I got there mind. 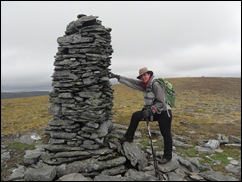 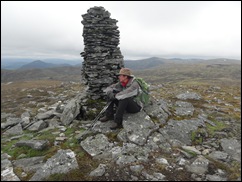 Time to enjoy the view 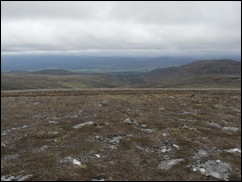 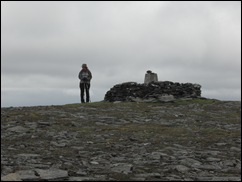 The trig on Carn an Freiceadain 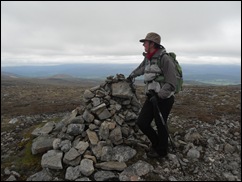 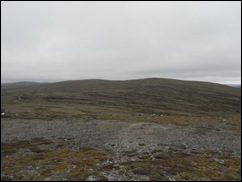 I’d really got into my stride by now and we continued on to take in Beinn Bhreac aswell. The track is quite steep and stony on the downhill and I remembered the last time I’d attempted such a descent each and every step was excruciating. This time, not a hint. Good stuff. On the way, we found a delightful little shooting hut in which to stop for a snack. There was a good store of wood outside for the marvellous stove and an incredible dining table. 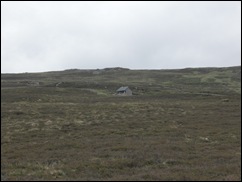 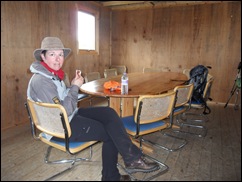 And a very large dinner table!

We soon found ourselves returning to town, jumping back into the car and going home.

And what do you do with yourself when you’ve been back from the Challenge for a week and you’re still suffering withdrawal symptoms?

You go looking for a new pair of boots of course!

Anybody who knows me, knows that I am exceptionally bad at making decisions, so if you have anything useful to say that might help me, please do. Useful, mind.

I have had my feet properly measured and all that and tried on a few boots. On the shortlist  Meindl Burma Pro or Meindl Softline (that in itself is a bit of an issue, as there appears to be two versions of this boot and I think the pair I tried were the 2011 version. That might help the decision making in the long run.)

As it happens, I had to go up half a size in the Burma, which puts me into the popular size that is trickier to get hold of.

I like them both. They are both very comfy. The Burma has a more rigid sole which I am lead to believe is more suitable, but I don’t know anything about the technical side (nothing new there then.)

I’m erring towards the Burma…