We survived the trip down to Stirling for the wedding.

As it happens, David is quite right. It’s not my legs I need to worry about. 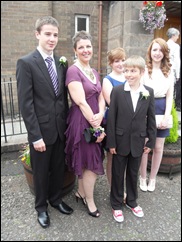 Shoes and dress (l to r Aedan, Me, Ciara, Conall and Rhiannon)

The shoes were off before the wedding breakfast, replaced with flat ‘dancing pumps’ secreted away in Rhiannon’s enormous clutch bag to ceilidh in. I’m not completely mad!

No, seriously. It’s not funny.

It’s a form of torture.

To the utterly ridiculous…

So, at the wedding we are going to at the weekend, there is a serious risk of injury.

We caught a train to Inverness, armed with new boots, new trousers, a new pack, a new tent, a new Tilley, Spenco 2nd Skin and a new sleeping bag. So, this was just an overnight trip to try out new stuff. Not much of which was mine. 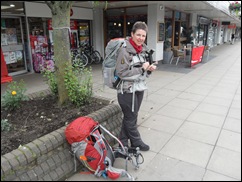 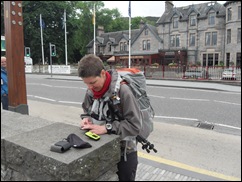 Determined to get to grips with Viewranger… 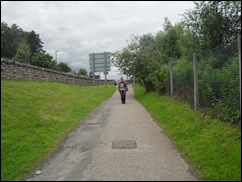 And finally we’re on our way 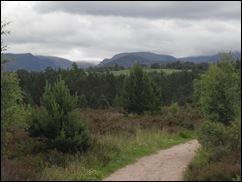 Lairig Ghru in the distance

We had a minor faff in Aviemore to buy paracetamol (suddenly realised I’d not replenished tablets whilst checking dressings in my first aid kit before we left) and a last visit to porcelain, then a GPS faff, before heading off towards Loch an Eilein. At Inverdruie we faffed briefly and then took a woodland track leading to the loch but at some point, we became slightly navigationally mislaid. The usual, I knew where I was, I knew where I wanted to be, I just had to take an unplanned route to get there! Shortly after that I had a minor left/right issue, but that was easily corrected after a few hundred metres. Oops. 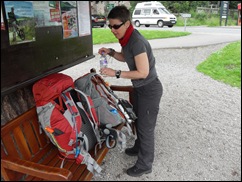 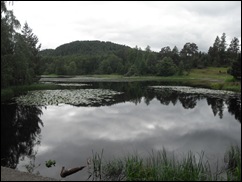 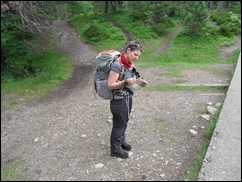 …which strictly speaking we shouldn’t have seen 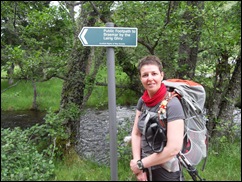 Wasn’t planning on going that far

Heading in the right direction again, we no longer needed the map as this is very familiar territory. We crossed the Am Beanaidh via the Cairngorm Club Footbridge and started looking for a pitch. 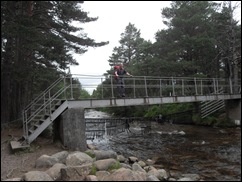 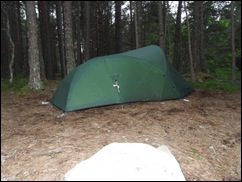 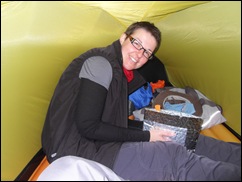 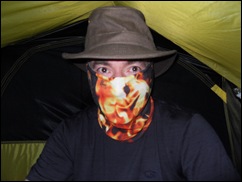 *After sometime, a suitable pitch was found and the new Voyager Superlight was thrown up for his Christening. Gear was unceremoniously stowed inside, water fetched, boiled and meals rehydrated. The Voyager Superlight was duly toasted with a wee dram of Glenkinchie (it managed to survive the Challenge) and named ‘Sorley’, the anglisized version of the Gaelic  name Somhairle meaning summer traveller. A quiet evening was had before we retired to listen to the rain pattering on the flysheet, quite relaxed in the knowledge that TTS had seam-sealed a few days ago and we would be water tight.

We woke to find a few drips. Some were splashes of condensation (TTS is a ‘moist’ sleeper’, I blame him…) but some looked more sinister. Like a bit of a leak. (Hey, I can blame TTS for that too!) This will have to be investigated thoroughly and I will be disappointed if it is not remedied easily as I have plans for this tent. There were a few more light showers and we decided to wait a while before making a move and breaking camp. We were in no hurry.

Eventually, after a luxurious breakfast of coffee and petit pain au chocolate (we were only out for one night on a short walk, we could manage a few luxuries) and baby bel (not together, yuk) we stuffed everything back into our packs and set off back to Aviemore in time for a couple of pints of Cairngorm Brewery Wild Cat and a bite to eat at the Winking Owl before making our way to the station to catch the train back home. 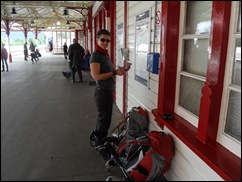 We both have a pair of these now, but at least they are different colours so aren’t quite matching his and hers. We both found them extremely comfortable although quite warm, so walking on a hot day like I did towards the end of the Challenge could be interesting. I had no rubbing or discomfort and considering my feet have only just fully healed, so are potentially still vulnerable, I was pleased. Of course, we were using easy tracks, so it was only a gentle test, but I don’t foresee any issues.

I concluded after the heat at the end of this years Challenge that I needed some summer walking trousers. I settled on a pair of Berghaus Ortler pants and I have to say they are extremely comfortable. They fit well, which I often find difficult with my silly shape of ridiculous waist and unfortunate hips. I love the leg venting and the feel of the fabric. I am overall very pleased with these.

I have persuaded TTS into an Osprey pack, but he still feels more comfortable in something more substantial, so a Kestrel it is. He found it very comfortable to carry when loaded and loved all the features, especially the external bladder holder and pole stashing system.

I have finally persuaded TTS into a hat he will enjoy wearing and avoid the glowing pate he tends to sport when out and about. I adore my hemp Tilley and having tried a few on, TTS also settled for this model. Bit of a shame, now we have matching his and hers, but they are excellent hats!

David needed a better sleeping bag but wasn’t prepared to shell out (like I did) on a PHD bag, so we settled for a RAB Neutrino 400. He was certainly warm.

There are investigations to be carried out and perhaps another seam-sealing moment will be in order, but the tent itself is easy to pitch and drop, splits nicely between two but I could quite happily carry it myself (and probably will) as it weighs no more than my Kraz but will obviously give me far more space and comfort.

I had the misfortune to need this on the Challenge (fortunately someone was kind enough to donate some to me) and it is magic stuff, so I have sourced some and will now carry it with me at all times. Hopefully, armed with my new Burmas, I won’t need it, but I know it’s in my first aid kit if I do.

* Now is probably the time for a small confession. I had intended a wild camp somewhere after the Cairngorm Club Footbridge, however, as we wondered up the track, everywhere appeared to be a tad damp and overgrown. I couldn’t be bothered to wander too much further on so we turned back and made a bee line for the Coylumbridge campsite. Porcelain and hot showers!

Last weekend was a weekend away with the Guides and Rangers at PGL Dalguise.

PGL stands for Parents Get Lost apparently. It is a holiday camp for children where individuals, groups and youth organisations can have an adventure holiday with good accommodation and food. Of sorts.

We took three Rangers and six Guides on our trip and we all had a ball. There was zip wire, fencing, giant swing and archery on the first day. I joined in with the archery. There was Jacob’s ladder, challenge course, Sequoia scramble and survivors on the second day. I did the challenge course and didn’t get very far on the Sequoia scramble! On the last morning we had trapeze and vertical challenge. I did neither.

By the end of the weekend, I hurt. Not from the activities, from the laughing. Particularly when Janet, Maxine and I completed the challenge course. Well, I did. I was the only one (out of us leaders) that completed without injury or missing an element. But then, it didn’t include much up, more along and undignified.

That was the main bit of the weekend anyway.

Ciara emerges from a 10m stretch of tunnel with water running through. No.

Leap for the buoy rather than trapeze

Not surprisingly there are no photographs of me…

As I previously mentioned, David has a new tent. This tent obviously has to be christened. We haven’t taken delivery yet, but plans have to be made and so do lists!

I have a little route planned which will involve catching the train to Aviemore, walking to Loch an Eilein then off to the Cairngorm Club Footbridge, where we will find a pitch. The next day, we will return to Aviemore via Coylumbridge in time for a nice lunch, a couple of pints and the train home.

There is no great distance or ascent involved, it will all be purely for the pleasure of pitching the new tent.

In a couple of weeks time, we hope to do a second trip, this time catching the train to Blair Atholl, walking along Glen Bruar and continuing along the Minigaig, pitching somewhere roughly NN816838. We’ll make our way the next day through Glen Tromie to Kingussie to catch the train home.

So, we have plans. We just need all the new shiny gear to arrive! Photographs to follow.

David is now the proud owner of a Voyager Superlight, part of his Significant Birthday present.

My question is, do we need to seam seal before use, if so, how and with any specific product? Information from their website is not completely illuminating and I know someone out there will enlighten me.