I went on my usual Monday Girly walk today. It’s nothing special, but it’s usual a good time for a chin wag. I was a little surprised when, as Alison was walking ahead of me, I saw a small, furry creature scurry across the path just behind her heels.

I squatted down and peered into the undergrowth and sure enough, there it was, just nosing about, minding it’s own business. It came back out into the open, despite us having a very badly behaved beagle with us (she was a rascal today) and wandered up the track a little and back into the undergrowth.

It was obviously a vole of some sort and when I consulted my reference books, I concluded (without too much difficulty) that it was a bank vole, but a very relaxed one!

On the downside, the neighbours opposite our home have decided it’s time for Christmas decorations. Every outdoor surface is now bedecked with multi-coloured lights and a flashing Merry Christmas sign.

A very good friend of mine was telling me the other day about her young grand daughter starting to walk. As I was out walking today in the somewhat foul weather, I got to thinking about this and went off on a bit of a tangent.

When did I start to walk?

I don’t mean as a toddler, I mean as a Walker. Could I even remember my first Walk?

Well, after a bit of pondering, I think I can. And, oddly enough, it may have been in Scotland.

When I was about four, we came to Scotland for our summer holiday. We stayed at a farm house, which would have been a B&B or Guest House (and may have been around Aberfeldy?) and at a Guest House in Kingussie, which I believe is still there.

I remember quite a lot about this holiday.

I remember dad parking the car by the road near a loch and taking me with a little fishing net to, er, get wet probably (there is a bit of a history of certain family members throwing themselves into various bodies of water and then needing to be hauled out. I wasn’t the only one…). I remember a tiny frog in the fishing net, which had probably been surreptitiously placed there, and running back through the heather to show mum, who’d stayed at the car. Needless to say, I fell over (a lifelong habit) and the froglett escaped. I don’t think it was squashed. I was devastated. I don’t know where my siblings were.

We went on a walk that may have been on some kind of nature reserve. It was marsh and bog, with plank bridges over the worst of it. My brother gave me a fright, shouting “Stop!” at me as I was crossing one of the little bridges.

It turned out I had been about to step on an enormous, hairy, black caterpillar.

I think the caterpillar survived.

Later on, my siblings were running ahead on a track through forestry, despite having been told not to. I doubt I was doing as I was told, I just couldn’t keep up. At some point, my sister tripped or slipped and twisted her ankle, tearing a ligament. Ouch. We got a lift back in a landrover. Or tractor. Or some other robust vehicle. (I was only four, remember) and the holiday was quite quiet after that.

A couple of years later, we went to the Yorkshire Dales. For seven out the following eight years we stayed at the same Guest House in Bainbridge, the proprietor of which was recently a WI judge for Masterchef. She was pretty good in the kitchen department.

We walked in the Dales. To waterfalls. Around abbeys. Along rivers, Gunnerside Gill being a favourite. Buttertubs Pass, Askrigg Common, Malham Tarn, all over. The next most memorable walk would have been around the Ingleton Waterfalls trail.

It seemed like quite a long way to my little legs, but I didn’t mind. Until it started to rain. It really rained. Really wet stuff. We wouldn’t have had proper walking gear, it would have been trainers, jeans and a t-shirt, perhaps a towelling hoody (remember those? Mine was stripy!) and cagoule. The pack-a-mac type. The sort that isn’t really weather resistant. We got wet.

The five of us piled into dad’s Astra when we got back to the car park and proceeded to remove wet clothing, all those arms and legs everywhere, a bit of writhing. No wonder the local bobby tapped on the steamed up windows to enquire “Is everything all right sir?”

Nothing much seems to have changed when I walk… 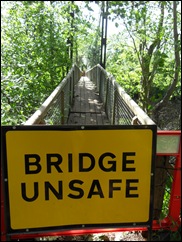 So I found out on Friday via a link on the TGO message board, and then officially by letter yesterday, that I am lucky enough to be on the Challenge next May.

I am very excited.

But I am doing my very, very best to remain calm and in control.

This is in keeping with my motto for next year’s Challenge:

We’ll see how that goes.

I have managed to get a little ahead of myself however. Knowing that accommodation at my intended start point can be hard to come by, I’ve booked a room already. I could camp that night, but I don’t really fancy starting the walk with a wet tent, which is, after all, a possibility!

My route sheets and admin form are filled in and poised. I’m trying to resist clicking the send button. I’m going to force myself to go over my distance and ascent calculations with a fine tooth comb before sending them off with an apologetic email, but I’m sure there won’t be that many other sad obsessives ready at this point. Maybe?

I’ll try to restrain myself…

So looking forward to seeing all my new friends and making some more along the way. It’s going to be fabulous!

Sixteen years ago today, our beautiful little girl arrived a month premature, looking like a skinned rabbit, weighing in at 5lbs 13oz.

These days she’s a bit bigger, but just as beautiful. 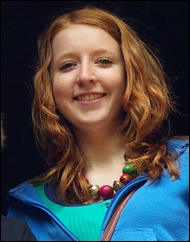 The day started so well! Well, sort of.

No ‘plop’ on the doormat when the postie delivered the post, but at least a present and card for the eldest daughter’s  impending 16th birthday on Monday.

I dared myself to go online and check the message board, no one else had had one either, phew!

On my brisk morning walk I made myself pause to finally identify the bird who’s song I hear regularly. Sure enough, as the little bird darted through the branches of the pine trees, the sun eventually peeped out from behind the clouds for a moment long enough to make the little bird’s crest glow. A gold crest! Thought so, good stuff.

When I returned, I had time to anoint the Christmas cake that I baked yesterday with brandy before the two minute silence and when I popped it into my dark, cool cupboard, I happened across another Christmas pudding! I thought I only had two left, bonus.

So, on to buy a couple of books with my National Book Token.

Oh, if only! Nope, you can’t buy books with them online. That is not convenient.

Eldest son has asked to go skating with friends in town on Sunday, but it clashes a little with the parade that Ciara is going to, being a good Guide, so I thought he could go by bus, virtually door to door. Well, apparently not on a Sunday. Going by train means I’ll have to drop and collect him from the station, my trips onto town have now doubled. Ho hum, so much for trying to be green (and save cash).

(Life’s a bit dull around here, can you tell?!)

Today I saw something totally unexpected that I’ve wanted to see for a long time.

As I was on the return trip of my morning brisk walk, a creature ran across the road ahead of me and into the undergrowth. It was around two feet long with short legs, a very bushy tail and a deep, rich, reddish brown colour with a pale blaze on it’s chest.

I’ve been trying to convince myself otherwise, but the only conclusion I can reach is that it was one of these 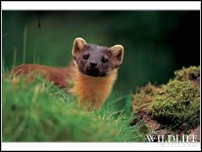