Laura and I had been talking about doing the Fishwives Path for quite sometime, but had been delayed from doing it by weather, short daylight hours and other commitments. This time, however, we were not thwarted by any of these obstacles and forged ahead with our plans.
I met Laura in Keith, where we abandoned the van and I drove to Buckie to abandon the car and walk back towards the promised coffee and cake.
Laura had previously done the best part of this route, but somehow, we still managed to go wrong right at the beginning. Instead of right, left, right, we went right, right, but we were not ‘lost’, we knew we were still in Buckie at this point! So we just took a more ‘scenic’ route to the distillery, where we needed to cross the main road to join the path. There were no further navigational difficulties. I swear it’s the buildings… 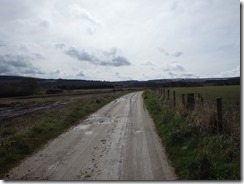 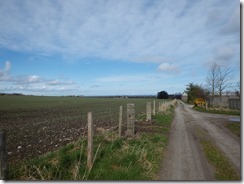 Looking back towards Buckie
The path is generally good, a little muddy in places, but clear and easy to follow (could do with a couple of finger posts at the start, but later there are plenty) and good progress was made. Not long after joining the way, we came to the pretty  hamlet of Drybridge, where there was a nice bench, an information board and a very friendly border collie. I took a seat while Laura had a jacket faff, the dog sat at my feet, looking at me appealingly. I suspect others may have sat there and given him affection and treats perhaps. I spoke to him nicely and explained why I was doing neither. 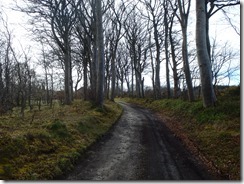 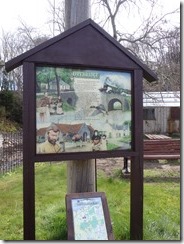 The sweet doggy
Soon we were on our way again. It wasn’t long before we were stopped by a farmer at Newton of Letterfourie who wanted to explain why he had put in a stile and locked the gate, but it did not cause us difficulties and we continued on, entering an area of forestry as we gradually climbed uphill. The weather up to this point was good. The skies were mainly blue, there were a few large clouds but nothing threatening until later in the afternoon. It was quite cool though, especially when we were out of the shelter of the trees, so we just kept going. 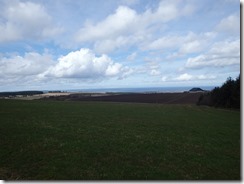 Looking back along the coast 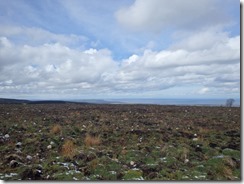 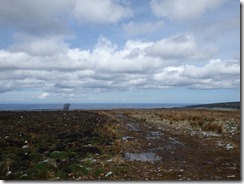 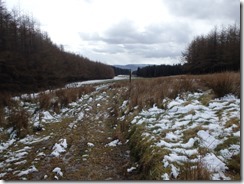 Looking ahead towards the forestry 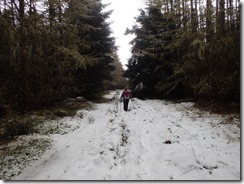 Through the snow we trudged 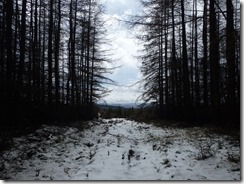 Through the trees, almost downhill all the way from here
Somewhere after the Hill of Stonyslacks we were surprised by a vicious snow flurry and a pause was taken to put on waterproofs, but we quickly moved on again in the hope of finding a dry, sheltered spot, perhaps with a picnic bench, to stop for lunch. At one point, we were considering bus shelters, phone boxes or even wheelie bins! In the end, the only good bench was back at Drybridge, just a couple of miles from the start point and before lunch had become important. We never found a good spot, let alone the perfect one, so lunch was not eaten during the walk. 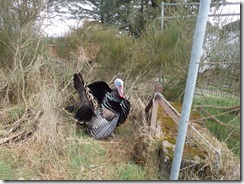 Laura and I were both puzzled when a few small birds in flight sounded like a turkey, until we spotted this fella, making all the noise! 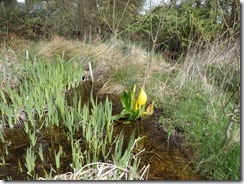 Skunk Cabbage
Once we’d made our way through the forestry and down the hill from Fernking, we joined a minor road and remained on roads to the end of the walk. This was not as tedious as it sounds, the roads were mainly quiet, apart from the big lorry blocking a section of it as he filled pot holes and a couple of large tractors that thundered by. The wind was increasingly cold and the snow/rain/hail shows more frequent, but on we plodded, deciding this was all good Challenge training, even down to the variety of ground surfaces and weather conditions. The one thing that will be different is the company, I’m expecting much less.
Once into Keith, we realised we didn’t really want to walk to the official end point as this would take us away from the van and unusually for either of us, we chose a route that took us directly back to van. A bit of faffing ensued before we jumped inside to eat our sandwiches, then an executive decision was made to adjourn to Boogie Woogie for coffee and either crisps (Laura) or plain scone, butter and jam (me!) 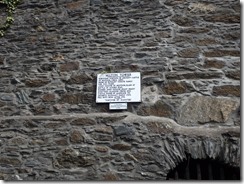 A plaque on Milton Tower 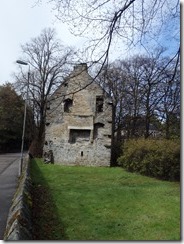 Milton Tower
It was a jolly fine day out, with approximately 13.5 miles total and 1,309 feet total ascent.
Thank you Laura!!

Alan likes to publish his gear list for the Challenge. Apparently, this is my fault, but I deny this. I did not publish the first Gear List, but he obviously saw mine and liked the idea…
Anyway, this year I have made a few changes, which I may, or may not, regret, so I’ve decided to publish my list, as much for my own records as for anyone’s interest.