The long and the short of it

I’ll confess straight away, this is nothing to do with walking or hills. This is about our girls.

The girls decided three weeks ago that they would get sponsored to have their hair cut off and donate both the hair and the sponsorship monies to the Little Princess Trust. This is a charity that makes real-hair wigs for young people that have lost their own hair through cancer treatments and other serious illnesses. 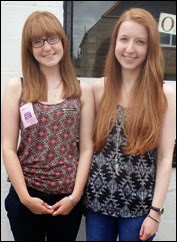 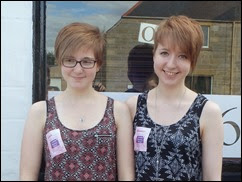 We are so proud of our girls and they look stunning to boot! If you should feel inclined to support this wonderful cause, here is a link to their donations page, and thank you.

An out and back, in a round about way

Trigpointing #2
There’s a small, fairly isolated, rounded hill that we have passed on almost every journey down south for the past twenty odd years and I’ve walked passed it too on a few occasions and every time I’ve thought, “I really must climb that hill sometime.”
Well, today, we did.
We headed south towards Grantown-on-Spey and parked up in the layby so that we could pick up the Dava Way and head north. As we set off, the local chap using his sit on mower to cut the grass verge stopped us and persuaded David to move the car to a more convenient spot, just opposite the start of our walk. I walked along the verge and David moved the car. Then, we joined the Dava Way and headed north. Our goal, the Knock of Braemory, soon hove into view. 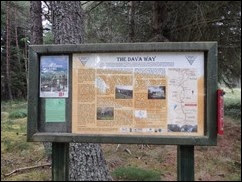 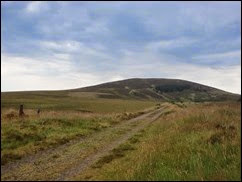 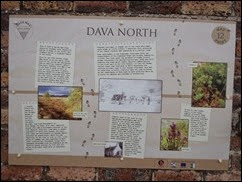 Another information board
There are no paths or tracks leading up the Knock, so after following the Dava a short way, we left it and cut across what should normally be quite boggy ground to pick up a vague ancient track that runs parallel with the road, taking in a few gentle contours on the way. After not quite a mile of fairly dry bog and a bit of heatheriness, we started to head slightly more directly uphill, over rough ground. Very rough ground. With a choice of much longer heatheriness or very long grass with lots and lots of really jaggy thistles. It was a bit of a struggle either way. So we struggled. Or at least, I struggled, David found it a whole lot easier.
It was quite a warm day despite being overcast, a mere 25 deg C as we I toiled up hill. After a little while, and a brief pause sitting on a handy rock, we made it to the top of the little hill and to the trig point. The views are stunning up there! Or would have been without the haze, but still worth the hard work. I have never sat on a trip point before. It wasn’t until after David had persuaded me that I could, that I realised once up, I’d have to get back down again. I didn’t hurt myself too much… 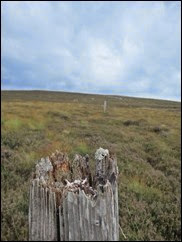 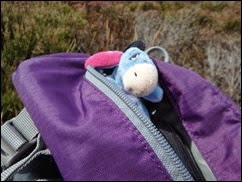 No wonder I was struggling, I was carrying a donkey!! 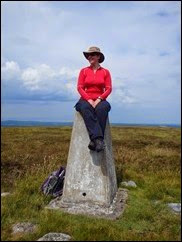 I look nothing like a garden gnome, they don’t wear Tilley hats… 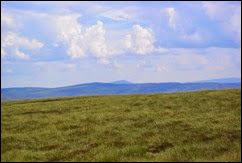 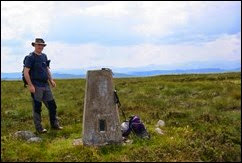 Playing with panorama on my camera 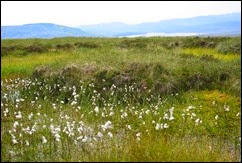 Over the bog cotton to Lochindorb 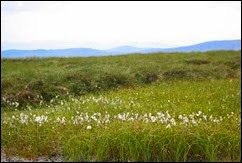 Over the bog cotton to the Cairngorms
There were a couple of small pools at the top, I think normally they might be small lochans, but it’s been very dry over the last year or so. I was puzzled by the strange fluttering noise I could hear as I was taking photographs of the scenery but eventually spotted a dragonfly, then another, then a couple more!

In the middle of that photograph, there is a dragonfly. I did not have the right equipment with me!
We made our way off the little hill in a slightly different direction, knowing that we would eventually drop onto the the Dava Way again and could head south back to the car. From this view point, we could just about see the spot Laura and I camped just over a year ago on our Pre-TGO Challenge overnight camp at Bogeney 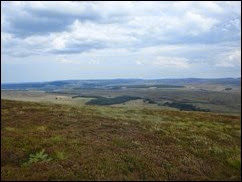 Camp spot, almost centre of the photograph
All in all, a really rather lovely walk and I’m glad that, at last, I won’t ever pass this small hill and think, “I really must climb that hill sometime!”
In total (roughly, as usual) 4.63 miles and 747 feet ascent
Posted by Louise at 21:28 No comments: