On the edge of The Unmentionable Mountains (or alt. David’s Nearly 50th birthday walk)

David was Nearly 50 yesterday, so for a treat, we went out for a walk. We decided to go for Geal-Charn Mor and one or two other lumps nearby. We set off on a beautiful day, clear blue skies with a light breeze, although there were hazy views of the distant peaks. The car was abandoned over the bridge at Lynwilg and we set off up the Burma Road. 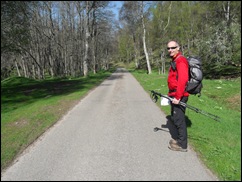 Birthday Boy
This route start off steep and kept going, but I put into practice what Mike had taught me and just kept plodding on. It was quite warm to start with, but thankfully as we got higher, there was a pleasant cooling breeze. 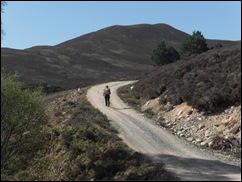 Onwards and upwards
On we went and the road soon turned to track, a recently ‘improved’ track even, but I’ll come to that. When the stream on our left converged with another coming down from the lump on the left, we struck out, or rather up, the steep, heathery hill on our right, to eventually reach Carn Dearg Mor. This was quite a rough, uphill hike over tussocky heather, but with wonderful views to take in on the odd occasion I paused for breath and evaluate my route. 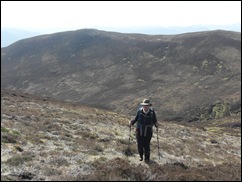 A not so rough bit
It was time for a picnic when we got to the top and there was a handy cairn to take shelter behind as I lightened the load in my daysack. 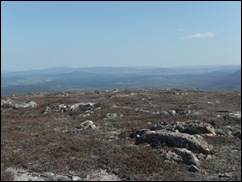 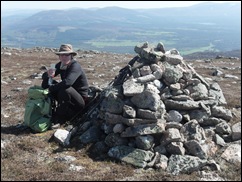 Refuel
Soon, we struck out again over rough ground to drop down slightly, cross a ‘stream’ or two (more of that later too) and make our way back to the Burma Road briefly before striking out on a path to Geal-Charn Mor, the highest point of the day. An easier route at this point as there is a vague path, although quite gritty and rocky in places. At the top, there’s a trig point with a small wall around it which again provided a bit of shelter. The views were stunning, all around the Cairngorm range and The Unmentionable Mountains stretched away into the haze. 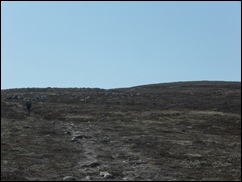 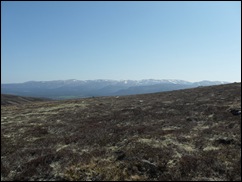 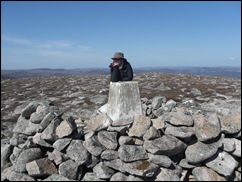 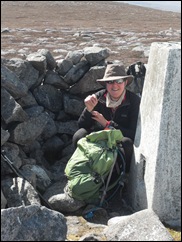 Sheltering to root in my daysac
Off we went, cross country again to reach An Scuabach, This bit was quite pleasurable, less heathery tussocks and more short, bouncy heathery and crunchy lichen We saw several hares while we floundered about and on the second half of the walk, lots of red grouse, some flying up from my feet as I barely missed stepping on them. They’re quite well camouflaged!
After a bit of wandering about to find the highest bit at this point, we set off again to find the source of a stream to navigate from to Cairn Creag Ghleannain, but this time the heather was the type that wraps itself around your ankles and hides deep, peaty holes. I didn’t fall over at all, which as anyone who has walked with me will know, is quite an accomplishment! 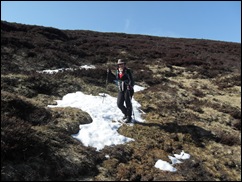 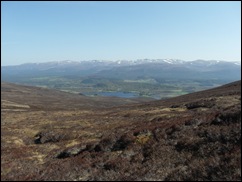 More views of the Cairngorms 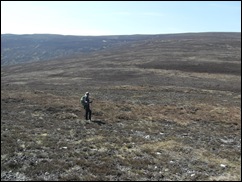 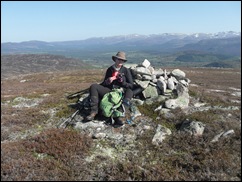 Take a break!
We soon reached the last high(ish) point of the day and had another snack stop before making our way down the hill. We couldn’t find the path we were supposed to join up with, so just kept going, through the heather, in the right general direction until we stumbled across a rather nice track that took us all the way down the hill. Part way down this track, we saw a raven, playing in the wind as they do, soaring and diving. A while after it disappeared, we were able to identify a pair of golden eagles, soaring above Creag na h-lolaire about a mile and a half away. What an end to the day.
We eventually dropped down to the farm at Ballinluig and onto a good track to take us back to Lynwilg. On the way, we had to pass through a field of sheep, not something that is normally very exciting, but we were lucky enough to happen across a placenta and close by the ewe and it’s minutes old newborn lamb, ahhh!!
We had a fabulous day for David’s Nearly 50th birthday and our last walk together before he ‘moves’ darn sarf. It’s going to be hard, but we’ll have fabulous memories of our walks together and look forward to many more when we can make it into the hills together. 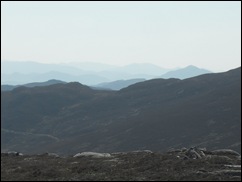 Beyond Kingussie
For me, this was another confidence booster. A couple of years ago, I would really have struggled with this walk. The rough ground would have sapped my energy and worn me down and I used to find navigating a route rather than following a path made me anxious and stressed. Now, my fitness has improved (I’m still unfit, but fitter than I was!) and I have more confidence, not only in David’s navigational skills (he’s actually pretty good) and mine (I was practicing taking and following bearings!) but in my ability overall, especially since the assault on the Borders. I’m feeling overall, pretty good!
And no sore legs, oh yes.
11.7 miles, 3,239 ft total ascent, 3,242 ft descent, walking 4 hours and 33 minutes, resting 1 hour 52 minutes and a moving average of 2.3 mph. Not bad.
The bits I said I’d go back to, I’ve never been on the Burma Road before, but it struck me that it looks like a scar on the landscape now that the diggers have been at it, I don’t know if it had any charm before. 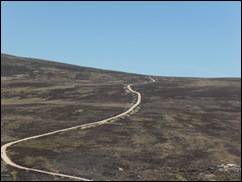 The long and winding Burma Road
The other point was the dryness. Everywhere was dry. There was the odd patch of sponginess and I did manage to find some soft bog to plunge my foot into, but the streams were poor, just damp greeness where I think streams usually flow freely and the plant life was dry and parched looking. I wonder if anyone on the Challenge crossing the Unmentionable Mountains or any other remote area, hoping for water, might find it tricky, we’ve had such a dry spring and no lying snow for a while.  Something to be mindful of perhaps.

Edited: There is also a huge fire raging on the Eskdale Moor around Loch Gorm, above Drumnadrochit, just for information.
Posted by Louise at 09:23

Hi Louise,
Lovely walk and good pics.
Have a good birthday David, you have a lot to put up with mate!
Ha

Bloomin' cheek! Quiet as a mouse me...

You seem to be ready for your assault on the unpronounceable parts of Scotland.....

I'm staying round the edges Mike, I don't want to get drawn in. Not yet...

Oohh. I'll be there soon, if my ribs get better in time.
It will look much nicer with some big windmills on it eh!

I'm now going to carefully avoid comment about which side of 50 David actually looks, bearing in mind he's been putting up with me for the last 17 years, ahem. (Children were definitely his idea, they're very ageing you know...)