Well, that was a giggle. David and I went for a walk yesterday. A little stroll, sixteen odd miles through forest and across the moors around Dunphail. Lovely.

It was actually a little project I’ve had for a while, to submit a walk to a walking website I’m a member of. A little ambitious perhaps, but it kind of makes me practice my map reading and grid references in a more exciting way than actually getting lost and trying to find my way home. Although, I’m sure that would be considered fun by some. Especially  if I didn’t  find my way home!

We had time constraints, as usual, and managed to set off a little late, as usual, so it was a bit of a route march, but it was perfect walking weather and we trotted off happily. We were trying out food at the same time, so had something hot to look forward to at lunch time.

We walked, I took pictures, we paused and read the map, got back on track, (bodes well…) we walked, waded through bog, climbed over fallen trees, walked some more,  and at the half way mark stopped off for a hot lunch in a handy hut. Couldn’t be classed as a bothy, there is grouse food stored in there, but there was a large table and benches. Would’ve been more attractive without the guano from roosting birds at regular intervals , but we found clean bits and ate lunch. It was yum! 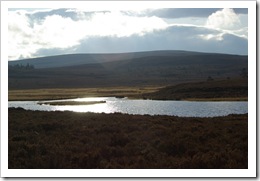 We set off at a good pace, mostly downhill now and with wonderful views over the Moray Firth towards the Black Isle. At around the three quarter mark, disaster. There’d been a landslide and about five metres of the path had been swept away towards the river below. Ahhh! It must have happened during the floods in July, or maybe a couple of weeks ago when we had torrential rain again.

We had no time to turn around, the ‘shortcut’ we’d passed was about nine miles behind us, we only had four to go and were running late as it was, we had to scramble. I’m not good at scrambling, but this wasn’t actually too bad and I didn’t complain, slip, slide, swear or whinge once. I was a good girl. And we made it!

We trotted on and made it back to the car just  at dusk, a tad later than intended, but safe and sound. Today, I don’t hurt. This has got to be good. (Achilles was sore  and inflamed last night though, which has got to be pants!)

Now of course, I’ve got to see if the walking website want my now truncated route.

I did say it was a little adventure. It was good fun though.