Let me introduce you

For a while now, I've been collecting tents.

We have Aedan's tent, a four man Gelert Eiger 4, Topsy, which would only house four very small men, because it's a tight squeeze for four children!


We have a four man Wynnster Falcon Deluxe Vis-a-Vis tent, Terry, for the children again, for last minute decision camping to use alongside Maisie.


We have The Palace, our family camping tent, a Gelert Alaska 8, which is a roomy, four bedroomed detached number with a lounge/kitchen/diner. Great for space, waterproof, but fun if the wind picks up! 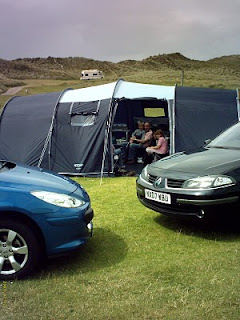 At The Sands, Gairloch, one of our favourite sites. 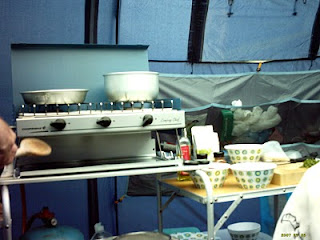 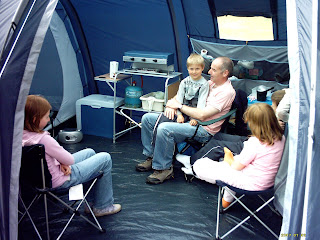 Fully equiped to cope with (almost) all eventualities. Quite impressed with that, you can't see the vast amounts of alcohol used to numb the pain.

We also have Maisie, a cute two man number, a Coleman Adrenaline 2, and possibly my favourite tent. She's lovely. Watertight, well ventilated, roomy and you can't lose her. 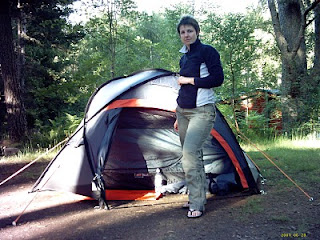 At another site we've used a few times, Rothiemurchus, a fabulous shower block, but the ground is stoney and the midgies are murder! This was when we walked home from Glenmore, through the Ryvoan Pass, Nethybridge, Grantown on Spey and up the Dava Way to Forres. When this photograph was taken, I had a raging migraine. Shortly after, I was in my bag. 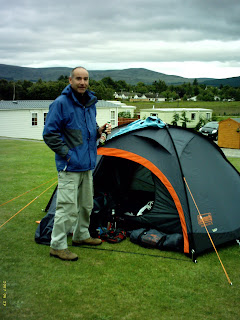 And here we have our newest member of the family, a Coleman Kraz 1, Bill. Bill has been specially acquired incase I have to attempt my first TGO Challenge solo. 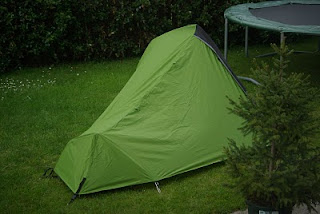 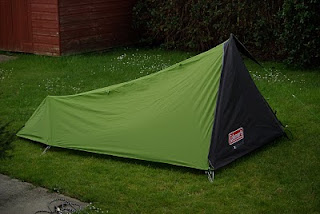 It would certainly be a challenge in the event that David couldn't join me! I'm quite confident that I could plod my way across Scotland with my no doubt huge pack, my navigation might need a little work, but should be ok, but I suspect I will be a nervous wild-camper, because I'm a wuss.
And David would have to trust me with a gas stove and matches.


I've been very keen to give Bill a whirl, so I pitched him in the garden. David came home from work, adjusted him, then said I should 'strike camp' because it looked like rain... I waited for another convenient moment yesterday and pitched Bill in the garden, only to have a the six year old from next door bombard me with questions, ("What's that?", "What's it for?", "Who's going to sleep in it?", "Why?") so I scuttled inside and and waited for dusk. Bearing in mind it's Midsummers Night tonight.

I retired to the annex at about 10.30 pm when I was fairly sure noone would be watching (we are quite overlooked here, but they know I'm barking) and I read for a while. When I cuddled down in my cosy bag, I realised I was missing essential equipment. In my pack, I would have had spare clothes and a small cloth bag to stuff and make a second, small cushion for my knee. I wriggled for comfort and realised I was missing something else. A slope! Lumpy ground! I'm not used to the comforts of a manicured lawn. I wriggled some more. By now, I was too hot. There was fairground noise in the background from the Summer Ball, a flashing light which I couldn't at first locate.

I need to take Bill into the wilderness for some peace and quiet. I have a plan, but I'm going to have to be patient.
Posted by Louise at 09:17

Speaking as a girly wuss of the first order, I reckon you'll be fine once you're out in wild, in an out-of-the-way place.

Look forward to hearing about the adventure, when you sort out family logistics to fit it in.

Hi Louise
It's a pity I'm stuck down here in Yorkshire as we could have done an overnight camp somewhere with your new tent. Maybe later in the year?

Gayle, I'll certainly give it a go. I have a possible route in mind and if I don't get much sleep (?!) I'll be able to manage the second day and get collected before I collapse in a heap!
Daft isn't it, I really want to do it, my rational head says it will be easy, but...

Laura, that is a fabulous idea, I'd love to! Look forward to you getting back to Scotland!

Go for it Louise - have a great time in the lumpy wilderness. Go seek the mole hills!

Thanks Martin, I will.

You just need to get out there with a friend in a lovely spot with a view and a splashing stream for company. After a nice walk, you'll sleep well.

You must apply for the Challenge next year! You will love it and there will be plenty of help to hand should you find yourself 'challenged' navigationally.

It's got to be done, I've been building up to it for such a long time! Just need to stop fretting about it. What a wuss!