A walk, at last

I haven’t been doing much other than my regular walks since New Year, but David and I decided we should make more of an effort when he comes home for the weekend. In order to get up early on the Saturday and  head off into the hills, our bags must be packed and no wine consumed on the Friday night. Mind you, if like this week the weather forecast is a little grim, the bags can wait till the morning, wine may be consumed and a closer, more low level walk will be enjoyed. Hence, yesterday, we found ourselves parking the car at Revack Lodge near Grantown-on-Spey just before lunch . This was basically a rerun (or re-walk…) of the route Laura and I took in December, but with a couple of minor alterations.

It was quite windy and gusty and there were varying amounts of precipitation, so I was quite glad I’d voiced my doubts of a high route this time! The path was mostly good but at times very wet and muddy and in some places there was lying, slippery snow. Last time, Laura and I found that the stile we had been expecting had been removed, but as we’d backtracked to use a gate we’d just parked, we found a friendly fellow who explained the new fencing and that alternative access was soon to be in place. 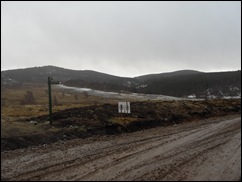 Shame about the state of the track at the new signpost

Well, we found a new signpost this time, at said gate, that was not locked. Of course, as soon as we had to make a break into the open here, we were caught in a heavy shower, but we were soon back into the shelter of the forestry, making our way up the steepest (and least used) part of our route. The path here goes alongside an old dyke (stonewall, in English) and at the top, I decided to seek shelter behind it to have my smoked salmon and cream cheese sandwiches. A good move. 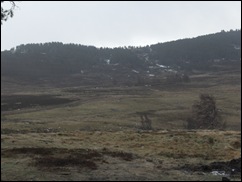 At the top of the hill, the track eventually joins a forestry road and then another, slippery, muddy path downhill through the trees to join another obviously more popular route.

Before reaching Castle Roy, this path was wet, snowy and slippery. I found myself  lying on my side in the mud and snow. With a sore bum. Still, a walk with me would not be a walk if this didn’t happen at some point…

Last time, where the track meets the road, Laura and I toddled carefully along the road a way before lunching in the church yard at the castle. This time, we took the Bacharn Trail towards Nethy Bridge. This kept us away from the roads and nicely sheltered. After a while wandering along quiet forestry tracks,  we found ourselves joining the road at the castle, just a few yards from our intended track to join the Speyside Way.

This was a bit more interesting than last time. David and I were walking along, discussing the rights of access at this particular point, as the track takes you between some farm buildings before reaching the (new) gate giving access to the Way. A tractor was driven through the yard ahead of us, as if to prove a point, and at the gate, the farmer got out. He hailed us and asked after our day and then asked where we had got the information from to say that we could use that track for access. He’d often seen walkers using it but not had an opportunity to ask before and was concerned for their safety in what is a busy, working environment. I had in fact downloaded this route from a site I often use, which I explained, but as we had been questioning the use of this particular stretch I sympathised with his concerns and offered to contact the site on his behalf. (It is perfectly feasible to access the Way just over a kilometre further on, by the Youth Hostel, so that was the suggestion I gave in my email.) He was most grateful and we went on our way.

It is an easy walk back alongside the River Spey towards Revack Estate from here, but as we cut back up to the road near Auchernack, we took another slight detour. Laura and I had walked a short way along the road and then up the winding drive way to the car park. This time, David and I took a punt that the track leading from the road at roughly NJ 028 456 would take is to, or at least close to our intended destination, so off we went. It was a bit muddy and wet in places and there was a small fence to climb, but we soon found ourselves standing by the side of the car, stripping off waterproofs and wet boots.

It may not have been the day in the hills that David was after, but it was a nice walk and great fun. Roughly 14.2km, 305m ascent taking 3 hrs and 58 minutes (including rests). This is even more of a rough guestimate than usual as the batteries in the GPS ran out part way round the walk. There are only two pictures because the batteries ran out part way around the walk!

Hi there - my ears are burning - did someone mention my name?
Glad you enjoyed your re-working of the walk.
BUT I noticed you didn't get the free coffee and mince pie this time......

Ah, you're right, I "forgot" to mention the coffee and cake at the end, but this time we did have to pay for it, humph!

Good work with the track issue - I always get on the defensive when folk ask me why I'm using a particular path or even just approach me. Bad experiences in the past....

Thanks Carl. The farmer was so friendly and only concerned for people's welfare. I contacted the website to point it out to them and had an email today to say they would adopt the suggestion I made just to lengthen the route slightly and access the Way in the village.

The smoked salmon was yum! (I seem to have forgotten to mention the yummy, gooey homemade chocolate brownie I'd already snaffled, before visiting the coffee shop. Ooops!)

It's been cold'n'orrible down here in the LandofMilk&Hunny and the only walking I have been doing is to Waitrose.

I must try harder! The beer belly is winning at the moment.

As I may have mentioned before Alan, all my problems are behind me! Copious amounts of cake are probably not helping with that...