The major bit of new or largely untested gear is my tent, Netty Notch. I had only spent about 3 nights in her before this Challenge, and the main test had been whether the midges could get in last June/July. Which they didn't.

This year, midgies weren't going to be the biggest issue.

The inner of this tent is half solid, half mesh, so it was possible that I could be cold, but I never felt that there was a cold draught coming through the mesh, so that was good. We had plenty of rain overnight, but Netty was completely water tight, which was also reassuring. The main problem faced this year was high winds, so pitching the tent and remaining upright was the concern. Because of some of the decisions I made, based on the forecast, meant I was mostly pitched safely with shelter, unlike some other unfortunate Challengers who had to endure several difficult nights. The worst conditions I faced were on the Invernahavon Campsite, so I was at least in a safe place, but I was still pretty worried by the huge gusts of wind over a two or three hour period, the torrential rain at the time meant that if Netty had failed my gear would all be soaked, so when the rain had first woken me, I had packed everything away in my rucksack and had a plan to rescue my sleeping bag and mat to keep them as dry as possible. As it was, Netty was awesome, my walking poles, Black Diamond Carbon FLZ, also new, were absolutely solid and we survived in tact.

As well as being pitched with my walking poles, the other main difference with this tent is having two porches. I find this incredibly useful. When Netty is pitched, she is pointy end into the wind. because of the way the doors open, one will open into the wind, the other will be sheltered, so when emptied I keep my rucksack in the windy porch as I won't be opening that one again till I drop the tent. The other porch is where I will keep my boots and water and use my stove, with the door open. Unless it is raining, this works well. If it is raining, it really depends on how the rain is falling as to whether I use my stove or not, I usually have enough food with me that I can cope without having to light my stove if necessary.

I need more practice to pitch her nicely every time, but overall, I think I like Netty, and trust her. 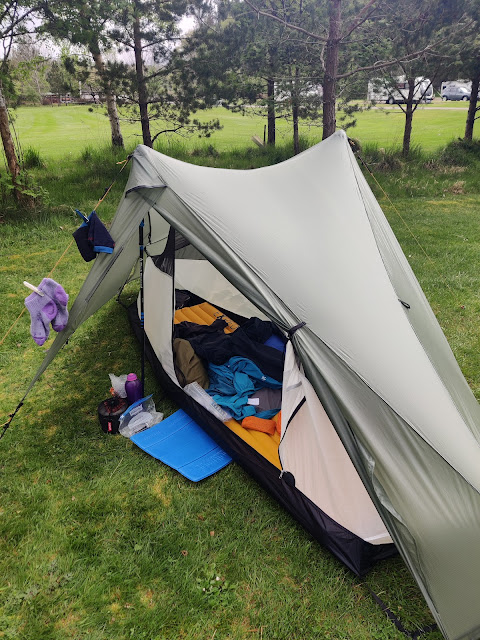 I had a new stove this year, an MSR Pocket Rocket Deluxe, and I had an Alpkit MyTi mug to go with it. I had debated what size gas canister to take as obviously I expected to use more gas than with my Jetboil Flash, but had no idea how much. I settled on taking a 230g cannister, and if needed I could collect a small can from Laura's front porch or buy one in Braemar or Ballater. I also knew I wouldn't be on my own in the second week, so if I badly miscalculated, there would be someone who had spare.

I found that I was comfortable with the stove after a few uses, it burned well and usually brought a half litre of water to the boil relatively quickly, unless it was catching a bit of wind. I did not use it in the porch without the door open, which I have done with my Flash in my Laser, but I don't think I would use the Flash in Netty's porch either.

I almost got across Scotland with the one canister, I just needed to borrow a small canister from Barry on the last morning for my coffee, so that gives me an idea of how much gas I might use in future, I did not have a hot meal and drink every night and sometimes no coffee in the morning, mainly due to mood, not weather.

The Alpit MyTi mug is also great, no issues with that except I am stupid and kept burning my fingers. I have made myself a pot grab to resolve this. 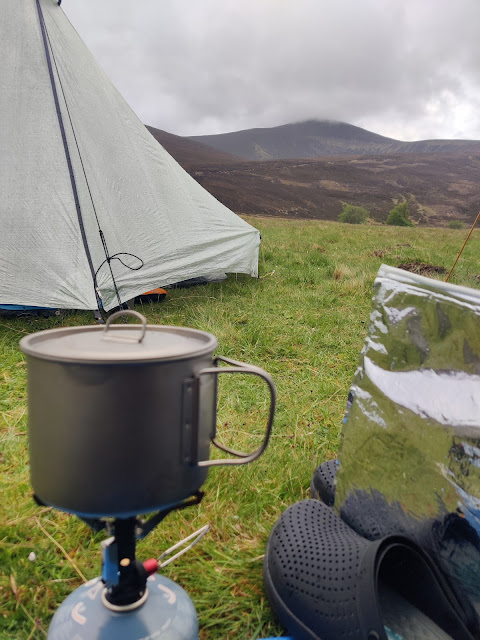 I love my Tilley hat, I have taken it on all but one of my Challenges thus far, but the brim catches on the top of my pack and gets irritating. So this year after a little bit of searching I found the Buff Trek Bucket Hat and I have loved it. It fits nicely, has a handy little bit of adjustable elastic cord at the back of the had, a big enough brim to give protection but not catch on my pack, it is light and comfortable to wear and takes up no space in the pack. A good buy.

Croc Literide. These are not a lightweight option, but they are a really comfortable shoe to wear when I take my boots off, which after suffering Plantar Fasciitis for nearly two years and recently resolving the issue, I wanted something with support and comfort, so this was my choice. I decided to pack them in the parcel I would collect at Newtonmore, this was an illogical decision given the river crossings I was due to make on days One and Seven, but in the event, I made no river crossings that required a change of footwear and got away with the decision. I would also say that, once I had my Crocs, I was glad of them when I took my boots off at the end of the day. They may be heavy, but are likely to be high on the list next time.

I wore the Borealis every day, either under my waterproofs, or as my top layer. I also wore it as a thin layer in bed over my Montane Primino Hoody. I love it. It is light and comfortable, very effective as a windproof and doesn't make me hot underneath my waterproofs. Love it. The Primino Hoody is super comfortable, surprisingly cosy for such a thin layer and the hood was fantastic instead a hat in my sleeping bag. I also wore this as my social top, as it is largely merino, it stays odour free for days, brilliant top.

A great t-shirt, worn every day to walk and only washed twice I think during the trip, just wish it was slightly longer.

Back to the drawing board with these, I took two pairs of Sloggi knickers, Wow Comfort and Sensual Fresh, neither of which were comfortable to walk in, one was better than the other thankfully. Merino is definitely better for freshness, just need to find a comfortable pair that don't have an awkwardly placed seam that rubs on my hips. I had sore, rubbed hips again this year, I like the rucksack, it carries well, but there is conflict between my rucksack belt and knickers that causes the rubbing which I need to resolve. I put clear film waterproof dressings on this year, the kind used on a canular or new tattoo, they definitely helped, but it was still sore enough that I had to take painkillers towards the end of the longer days, so I need to sort this.

Hoka One One Sky Kaha boots

I love these boots, no rubs, no blisters, no sore toes, all day comfort. I will buy them again.

Hmm. Saved my carrying much toilet paper, needs much more sunlight to work at its best. Enough said.

Salt of the Earth Deodourant Crystal

Brilliant, I felt much better than I usually do, I had a wipe down at night using the Panda wipes and then applied the crystal. I use the bigger version every day at home and for me, it is amazing. Love it.

Next time, don't forget it. I could definitely feel the cold coming up through my mat from the ground, just enough to notice it, if the weather had been colder, I would have been miserable. Take the mat!

At this moment in time, I think that was all my major new kit.

Clearly, I had a bit of a crisis before the start of the Challenge this year. There was a combination of issues which ganged up on me, but Ciara's advice of step by step, go to the start, was crucial. Once there, I was able to focus on each decision, one at a time, and once walking, I relaxed and had no further issues.

I did not eat brilliantly for a few days before setting off which did not help, and the first few days on the Challenge I wasn't brilliant either. The evening meal I had at the Prince's House Hotel definitely helped, once I got to Newtonmore, my food problems resolved.

I felt as though I didn't sleep well, but I think in reality, I was often asleep much earlier than normal, and even if I was awake several times in the night, it was mainly for very short periods of time, and on the whole I got a good amount of sleep. This probably helped with my mood and with my decision making.

The most important thing was meeting friends in the second week. It gives an enormous boost to be able to discus your adventures and to have them put into perspective by hearing theirs. Don't underestimate the power of your friends!

Netty, meaning "He (God) has favoured me". I had a windfall which had enabled me to by my Notch. And also, I hoped to be favoured with the weather when I Challenge.
🤣🤣🤣