Updating my photograph folder, I realised I have not documented the last three walks I’ve enjoyed with Laura, silly me!

The first Missing Walk was back on the 19th of October.

It wasn’t an exciting walk, it should have been productive, had we not both forgotten to do what we’d intended! Still, we had a lovely stroll to Aberlour and back via the Speyside Way and might have squeezed in a coffee and a scone at a local cafe while we there. Rude not to.

It was a cool day, and a bit damp at time requiring a waterproof faff, but pleasant enough and we enjoyed ourselves. 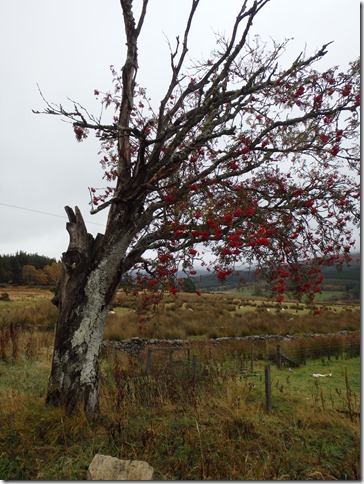 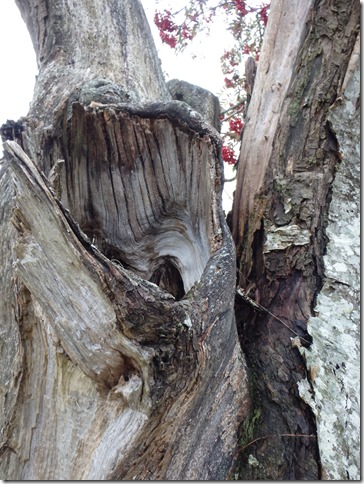 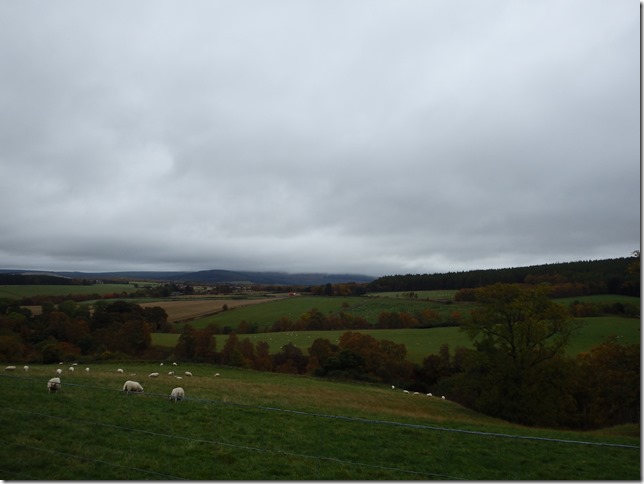 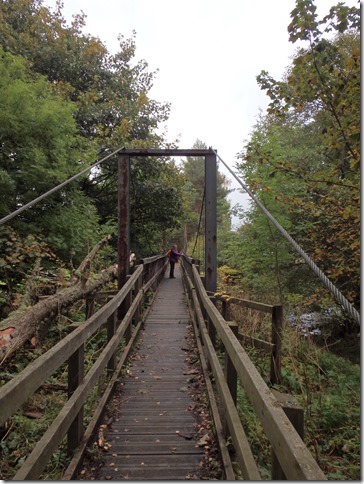 Bouncy bridge on the way there… 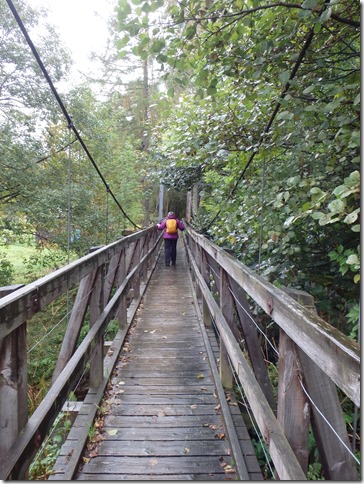 …and on the way back.

Roughly 8.14 miles and Viewranger is currently telling me a total of 1063 ft of ascent, but I would dispute this…

So, the second Missing Walk took place on 26th October and should have been one walk, but we chopped it in half. Ouch!

We started this and the next walk from Logie Steading, because then we could finish each walk with coffee and cake, or similar.

Done as a whole, the walk would see me on ground I know rather well, but put together with some vague and unfamiliar bits, including a path near the start of the walk that I’ve known about for a while but never found. Once on it, all became clear and I was quite chuffed to be using it at last! We wandered along some tracks eventually that I have been on before, but heading the other way, which makes things look very different, and in very wet weather. I admit to feeling quite uncomfortable around the Dunphail Estate, the people I met before did not seem overly pleased to see this group of damp, giggly girls, so this time with Laura I was a tad jumpy until we left the estate, crossed the Grantown Road and gained the Dava Way, much better, and the bit that I don’t mind walking.

*Harry the Hernia started to nag a bit before we got back to the Steading, but after we’d eaten our sandwiches in the car, I felt well enough to venture into the steading for coffee and a scone. 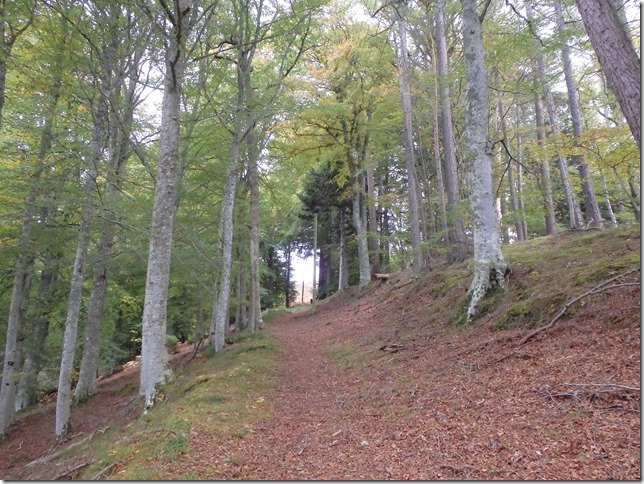 Not so hidden path once found 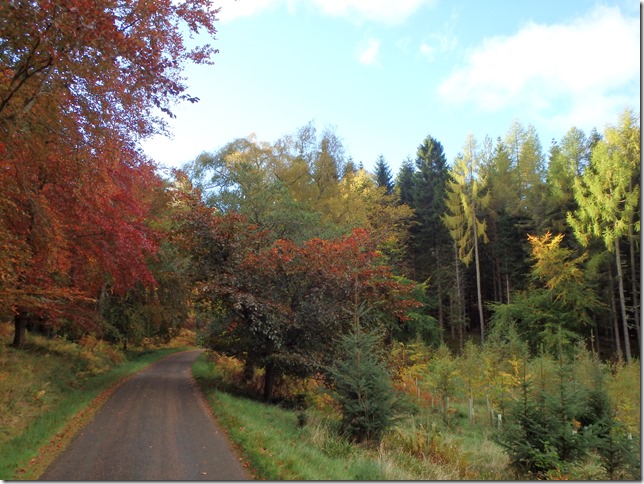 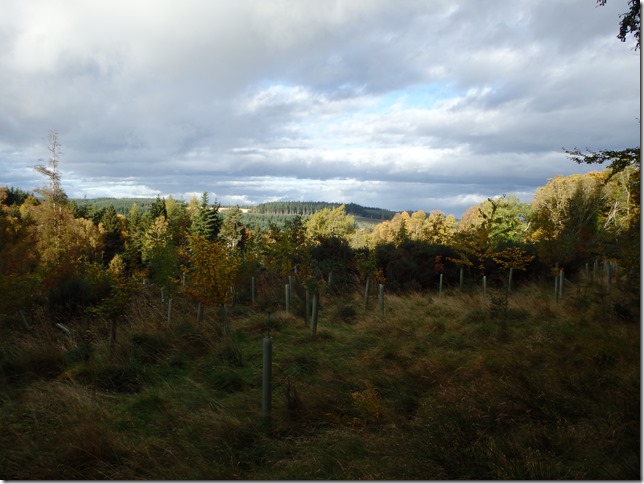 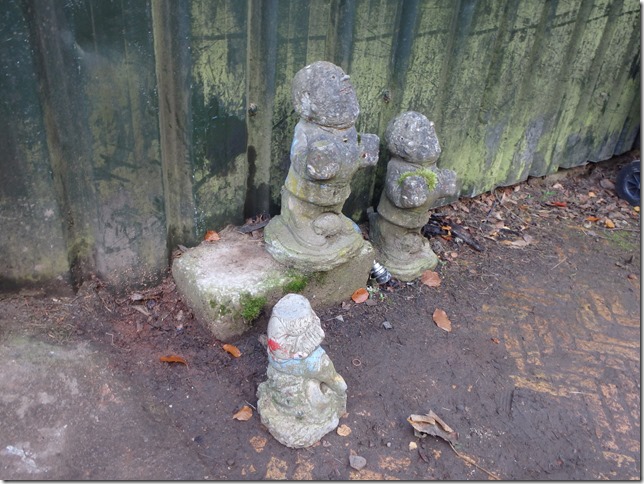 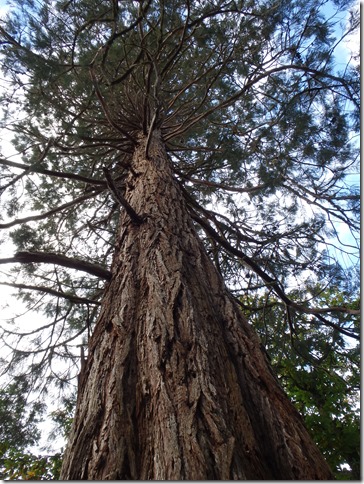 This and the surrounding estates are full of fabulous trees 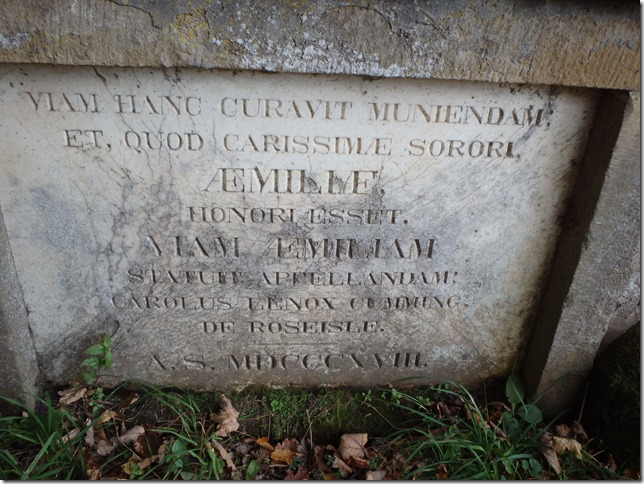 Laura and I practiced our Latin translation… 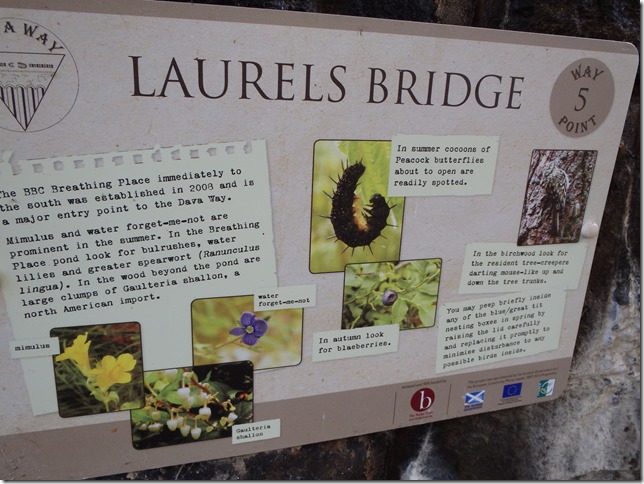 Information board on the Dava Way, just after Dunphail

Third of the Missing Walks was on 3rd November and was the northern half of the circuit, again, we set out from Logie Steading, retracing our steps to Peathillock before setting off along the Dava Way. I’d planned an interesting route to shorten the circuit slightly, firstly because otherwise we’d be tired and secondly, to avoid the shoot, I don’t like bumping into them if I can avoid it. So, we left the Way and headed for Drumine, with the attention of taking another track. However, there was a bit of a livestock issue in the shape of a herd of cattle and a flock of stupid sheep. The gate that lead in to the field was open, but we decided to follow the fence line instead in the hope we’d be able to cross the fence further down and get straight in to the woodland, then regain the track. Easier said than down. We found a gate in a handy place, but it had to be climbed as we couldn’t open it. As we followed the fence across the bottom of the field, the cows started to show little too much interest in us and we decided to cross the fence sooner rather than later to allow a controlled exit rather than a hurried one. But this happened. 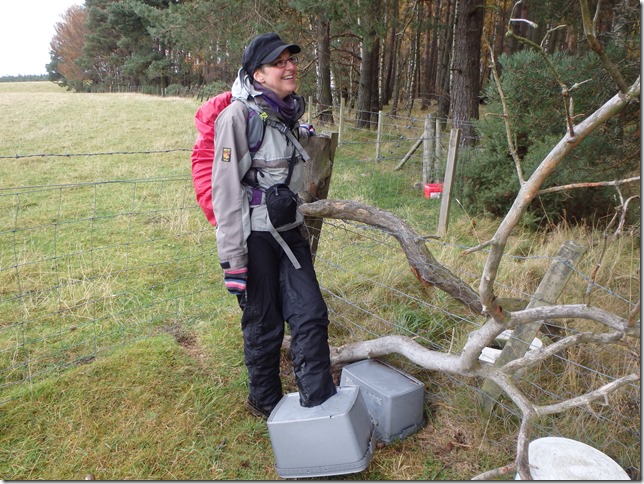 After a bit of rough ground through the trees, we regained the main track, but only for a short while as I’d planned to take another little track. It soon appeared and looked good. It got a big vague after a while, then disappeared, but we didn’t have far to go to meet the road, so plunged on through the woods over somewhat interesting ground until we eventually popped out onto the road, almost exactly as planned. Another unknown track was then taken, but it didn’t lead us too far astray and we soon crossed the Grantown Road, again.

At,Sluie we had a little fumble to find our way, it is a long time since I walked these paths and I was entering from a different point, which is a bit off putting, but eventually we were on the ‘interesting’ path by the side of the River Findhorn. Fabulous river, but much underestimated and one of Britain’s most dangerous rivers. The banks on both sides are overlooked by some amazing trees looking absolutely wonderful in their autumn colour.

At one point, just as I remembered, we skipped around a barrier that looks like a fence and I failed to point this out to Laura, who was a little perturbed when the path somewhat disappeared down the precipitously sloping bank. Sorry Laura! I’m so used to the little scrambly bit I’d forgotten it was there.

Still, we survived the slippery, slidey mud and the interesting set of steps and made it back to the steading in time for a delicious bowl of soup, a pot of tea and a scone (…the seems to be a theme developing…) 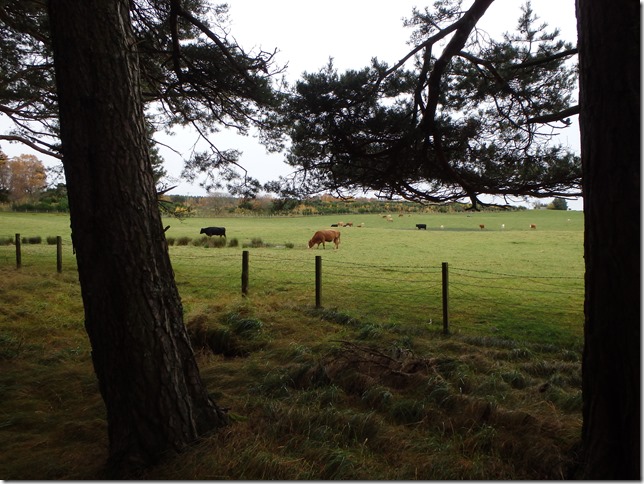 On the other side of the fence 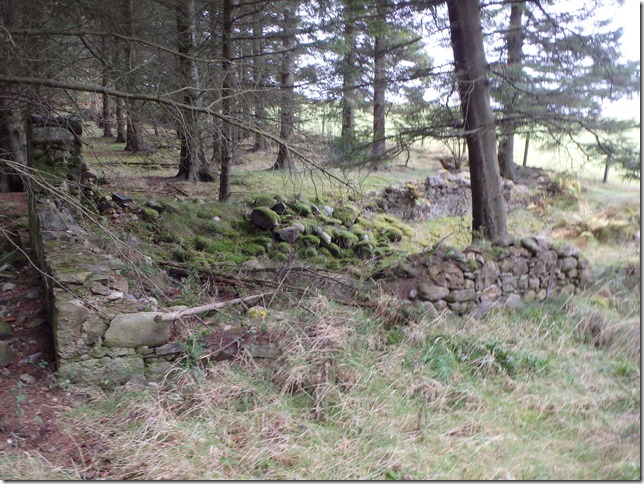 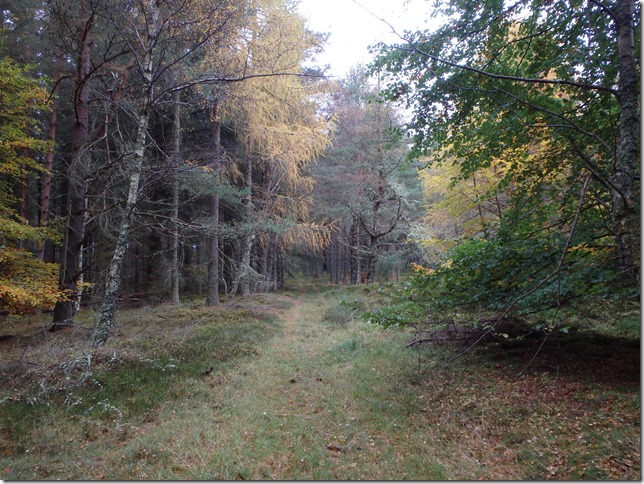 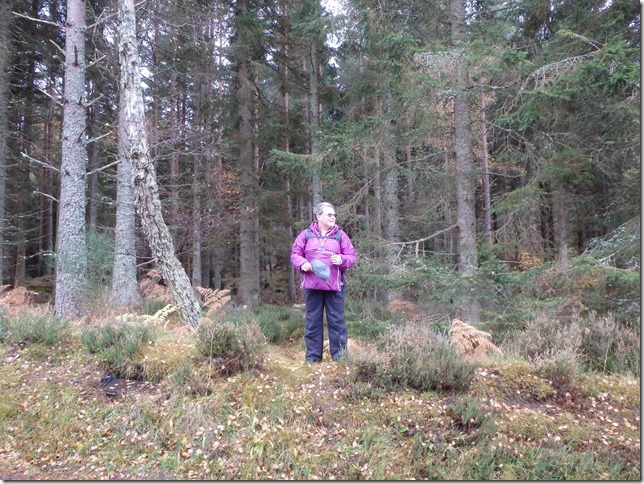 Laura popping out onto the road, all innocent like 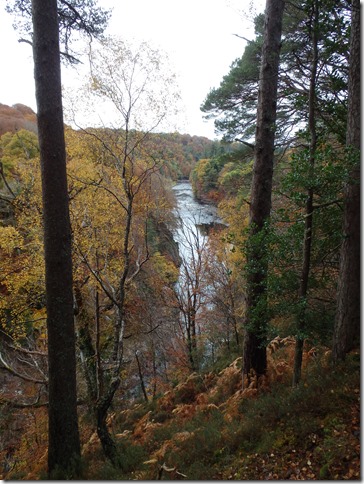 River Findhorn, through the trees 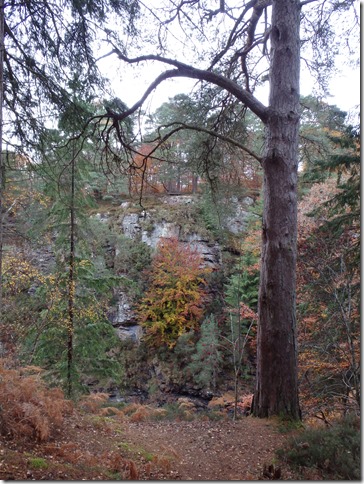 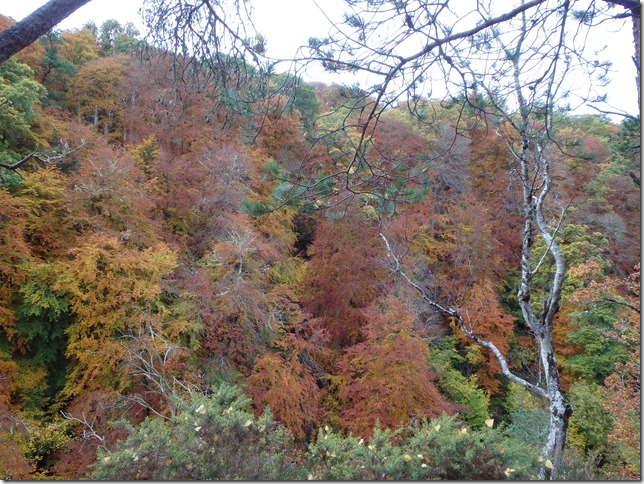 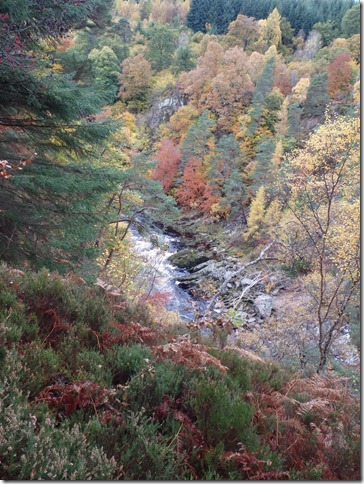 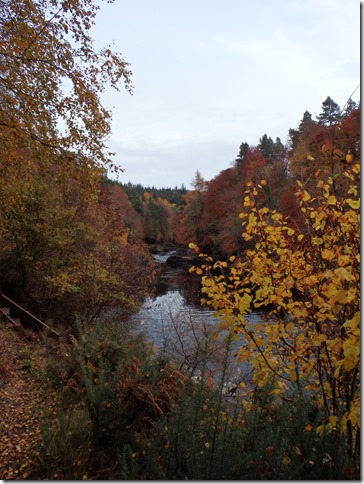 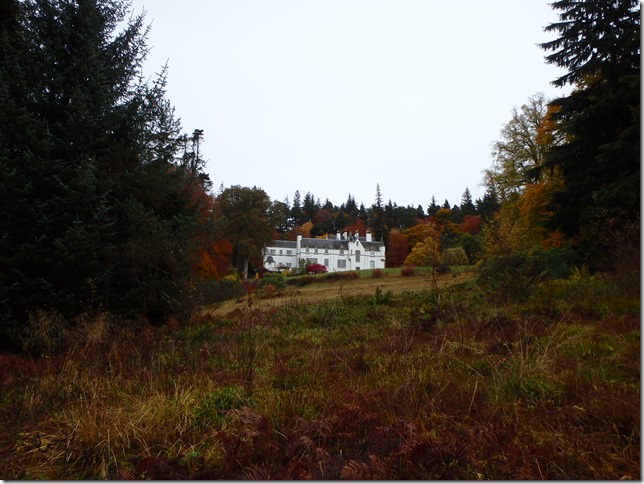 A fab three walks in excellent company, has to be said!

*Harry the Hernia is the Femoral Hernia I am currently waiting for surgery for. Keeps disappearing…

Great stuff - time for another?